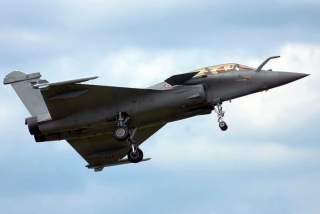 After a string of barbaric attacks on Paris that left 129 people dead on Friday, France has started to strike back at Daesh—the self styled Islamic State—terrorist organization. As part of the initial French response, the Armée de l'air hit targets in al-Raqqah, which Daesh claims as its capital.

Some twelve warplanes—a total of ten Dassault Rafales and Mirage 2000s—dropped twenty bombs on two targets according to the French Ministry of Defense. The first target was a Daesh facility, which the Islamic terrorist group was using as a command post, recruiting center and armory. The second target was a terrorist training camp.  “Operation Chammal hit operational structures held by Daesh in Raqqah, Syria,” reads a French Ministry of Defense statement. “The two targets of the strikes were destroyed.”

Meanwhile, France’s sole aircraft carrier—the nuclear-powered Charles De Gaulle—is set to deploy to the region when it leaves from Toulon on Wednesday. The 42,000-carrier, though less than half the size of the U.S. Navy’s Nimitz or Ford-class supercarriers, still packs a punch with an air wing consisting of Rafale Ms, Super Étendard strike aircraft and E-2C Hawkeye airborne early warning aircraft.

The vessel can carry about forty aircraft onboard including roughly twenty strike aircraft. Normally, Charles de Gaulle carries two fighter squadrons—one equipped with the Rafale M and another with the Super Étendard Modernisé—also referred to as the SEM. The Marine nationale—which is still colloquially referred to as La Royale— is expected retire the SEM in 2016 once there are enough Rafale Ms in service. The ship also carries a pair of Northrop Grumman E-2C Hawkeyes. The carrier is certified to launch and recover even larger aircraft like Boeing F/A-18E/F Super Hornet—and cross-deck operations have been practiced many times in the past.

During previous deployments, Charles de Gaulle sustained between ten and fifteen sorties per day for two months flying against Daesh. However, given the France’s rage over the recent attacks in Paris, the carrier might hit more targets per day but at the cost of endurance. Charles de Gaulle—with a full complement of aircraft—could generate up to 100 sorties per day, but the ship does not normally carry as many jets as it could (roughly a maximum of forty) nor enough weapons and jet fuel to sustain that pace for long.

It remains to be seen just how much France will pick up the pace of its operations against Daesh post the Paris attack. French president Francois Hollande vowed to destroy the Islamic terrorist movement in a speech before the both houses of the French Parliament earlier today at the Palace of Versailles. “France is at war,” Hollande said. “I want us to respond with the cold determination that is appropriate to this appalling attack. Our democracy has triumphed over far worse adversaries than these cowardly assassins, these appalling killers.”

Meanwhile, the United States is promising to intensify its so-far piddling air strikes. But U.S. president Barack Obama said that he would maintain his strategy because it’s working. “We always understood that this will be a long term campaign. We are concentrating on intensifying our air strikes against ISIS, of which there have been 8,000 to date, and on taking out ISIL leaders and killers, “ he said.

“We have it within our capacity to destroy the Islamic State leading to the elimination of their sanctuary for terror,” Deptula wrote in USA Today. However, to do so will require moving beyond the current anemic, pinprick air strikes, to a robust, comprehensive use of airpower — not simply in support of indigenous allied ground forces, but as the key force in taking down the Islamic State. It will require focusing on the Islamic State as a government, not an insurgency, and for Central Command and their subordinate task force to stop fighting the last war, and start the serious use of airpower.”

The question is not if the Pentagon has military might to annihilate Daesh. It’s a question of if the United States has the political will to wipe the Daesh scourge from the face of the Earth.