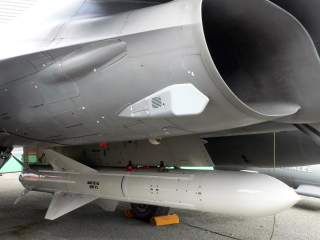 The Exocet, which became famous for sinking several British ships during the 1982 Falklands War, will be getting an upgraded guidance system, according to the naval website Navy Recognition.

The current MM40 Block 3 will be modified into the Block 3C, with a digital seeker to home in on enemy vessels. "While the missile range or speed are unlikely to change compared to the existing Block 3 variant, it will be upgraded with a new IIR (imaging infra red) seeker allowing the missile to recognize surface vessels profiles (thanks to a ship profile database stored on board)," Navy Recognition said.

"This is significant because, similar to anti-ship missiles of the latest generation such as the Norwegian NSM or American LRASM, the MM40 B3C would potentially be able to recognize a target within a group of ships and impact specific areas of the targeted surface vessel (such as its bridge, CIC[combat information center], helicopter hangar, weapon or sensor systems). By using advanced image processing techniques, the target shape can be used to find its most vulnerable part toward which the missile is then steered."

Various versions of the Exocet are used by almost thirty nations. The latest version of the missile has come a long way since its first use in 1975. The original MM38 had a range of just twenty-five miles. The MM40 Block 3 has a range of almost 125 miles. The Block 3C upgrade is slated for 2019–2020.

"Exocet MM40 Block 3’s Mission Planning software module automatically computes engagement plans to support firing decisions," according to Navy Recognition. "The flexibility of the Exocet MM40 Block 3 weapon is further enhanced by the accuracy of the new navigation package, allowing optimized 3D approach trajectories and terminal attacks from different azimuths, at very low sea skimming altitude with simultaneous time on target. The terminal guidance relies on a sophisticated J-band active seeker to discriminate and select targets at sea and on the GPS accuracy for land targets."

Meanwhile, the U.S. Navy is finally replacing its venerable Harpoon anti-ship missile, long outranged by Russian and Chinese weapons. The Long Range Anti-Ship Missile (LRASM), which reportedly has a range of more than 200 miles, is now entering production.

Still, even with weapons like Exocet and LRASM, Western navies may still find themselves outgunned—or out-missiled—by Russian and Chinese weapons. In contrast to subsonic Western missiles, Russia has a suite of supersonic anti-ship missiles. One of Moscow’s hypersonic anti-ship missiles is the 3M22 Zircon, whose reported Mach-6 speed has spurred fears that Britain's new aircraft carriers will be blown out of the water. China has developed the supersonic YJ-18, and has converted ballistic missiles into long-range ship-killers.