France's Only Nuclear-Powered Aircraft Carrier: A Military Juggernaut or a Complete Joke? 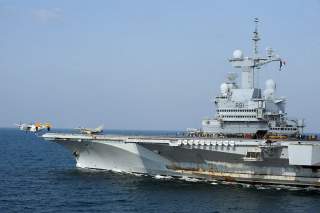 Of all the countries that have aircraft carriers, only two have constructed ships powered by nuclear energy. The United States is one country, but the second one might surprise: France. The French carrier Charles de Gaulle, also known as R91, is France’s first nuclear-powered surface vessel and its only carrier, making it the principal long-range striking arm of the French armed forces.

The French Navy began to examine the task of building new carriers in the 1970s. The two serving carriers, Foch and Clemenceau, were constructed in the early 1960s and would need replacing some time in the late 1980s. Together, the two conventionally powered carriers ensured that at least one ship was available at all times. It was anticipated that two replacement ships would be built, each nuclear-powered.

The new ships were named PAN, or Porte-Aéronefs Nucléaire. Hull construction on the first carrier began in 1987, and the ship was projected to enter service in 1994. In 1989, a two-year delay was announced, but the French Navy confidently predicted a second PAN would be ordered in 1991–92.

The first carrier, Charles de Gaulle, is 858 feet long with a beam of 211 feet. Two C-13 steam catapults, the same as on Nimitz-class carriers, are positioned on the bow and the angled flight deck. The flight deck is 1.4 times larger than the Foch-class carriers, allowing it to operate five more aircraft, for a total of forty planes. By 2013, according to the authoritative Combat Fleets of the World, Charles de Gaulle’s air wing would consist of ten to fourteen Rafale M fighters, twelve to sixteen Super Étendards, two to three E-2C Hawkeyes, two transport helicopters, and two Panther/Dauphin search-and-rescue and liaison helicopters.

Fully loaded, de Gaulle displaces 40,600 tons. The ship has 1,350 crew, plus 550 in the attached air wing. The ship also function as the flagship of the French Navy, and towards that role can embark an additional fifty flag staff. The carrier is powered by two K15 nuclear reactors, the same propulsion unit that ran France’s four nuclear ballistic-missile submarines, to a maximum speed of twenty-seven knots.

Charles de Gaulle’s development was a long and painful process. Construction came to a halt on numerous occasions, as a recession in the early 1990s and the end of the Cold War caused French defense spending to decline by 15 percent between 1990 and 2000. The carrier ended up being delivered to the French Navy three years late, and only started sea trials in 1999—twelve years after construction began.

The carrier had more than its share of problems. The angled flight deck was 14.4 feet too short to safely launch the new E-2C Hawkeyes, necessitating an extension that cost nearly a million dollars and added twenty-eight tons. The ship’s rudders showed excessive vibration, and by 1999 the ship was already showing wear and tear, likely due to the construction stoppages and the unfinished ship being exposed to the elements.

By far the worst problem was discovered in 2000, when one of its propellers broke apart during a voyage to Norfolk, Virginia. The propellers were replaced with those from the decommissioned Clemenceau, but the hot fix reduced its speed from twenty-seven to twenty-three knots. New replacement propellers were found to generate an unacceptable amount of noise, and the ship went back into drydock for repairs.

All told, the propeller issue left Charles de Gaulle sidelined for just over a year. The carrier was finally available in December 2001, whereupon it was immediately sent to the Indian Ocean to participate in the American-led bombing campaign of Al Qaeda and the Taliban in Afghanistan. The ship regularly participated in the air war over the country through the 2000s. In 2011, it conducted nearly 1,400 sorties over Libya as part of Operation Harmattan, flying reconnaissance and support missions.

Although promised for decades, France never bought a second aircraft carrier. The latest proposal was to build a France-optimized variant of the UK’s Queen Elizabeth class, but that proposal has gone quiet. Despite many promises, it appears increasingly likely that France can no longer support the financial cost of two carriers. For now and the foreseeable future, Charles de Gaulle is the only game in town.