A Frightening Thought: Congress’ Flip Flop on War and Diplomacy 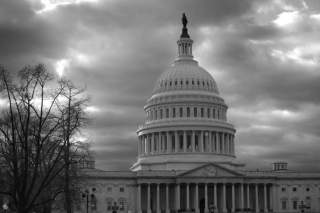 Little should now surprise us about politics in Washington, D.C., but we must note when it upends the historical balance of power between the President and Congress on matters of national security and foreign policy.  With its silence on authorizing the use of force against ISIS and arguments opposing a diplomatic deal with Iran, such actions would surely confound the Founding Fathers, who explicitly vested solely Congress with the power to declare war, while giving the Executive Branch wide latitude to negotiate treaties and reach international agreements. That Washington has strayed so far from such a deep-seeded historical precedent speaks volumes about not only today’s dysfunctional politics, but also the increasing primacy of the Executive Branch in matters of national security.

The flip-flop in divisions of power has been in sharp relief for the past year, as Congress continues to ignore Authorizations for the Use of Military Force against ISIS that were suggested by the Obama administration and proposed by Senators Tim Kaine (D-VA) and Jeff Flake (R-AZ) on a bipartisan basis. The delay is often ascribed to the fact that Republicans want a clearer strategy on defeating ISIS, while Democrats want a finite scope to such an authorization.  Unable to compromise on either matter, Congress achieves neither.  This deadlock results in an abdication of responsibility in weighty matters of war.

During the Constitutional Convention in 1787, when the War Powers Clause was being created, delegate Elbridge Gerry stated that he “never expected to hear in a Republic a motion to empower the Executive alone to declare war.” Such a mindset helps to explain why Congress was granted the sole power to declare war, “raise and support Armies,” and “provide and maintain a Navy.”  When advocating for the ratification of the Constitution, the authors of Federalist No. 74 only briefly discuss the Presidential role of Commander in Chief for the purposes of unity of command.  (In fact, far more time is spent discussing the importance of the Presidential ability to issue a pardon in time of civil conflict.)  From this context, it’s clear that the authorization for the President to exercise his powers as military commander is rooted in Congressional authorization for war.

Congress, for example, was outraged by the perceived overreach of Nixon’s expansion of the Vietnam War to Cambodia and Laos, and in response passed the 1973 War Powers Act strictly limiting the President’s ability to commit U.S. forces to combat in the absence of Congressional approval. Nixon’s subsequent veto of the legislation was answered by a Congressional override and, although later Presidents have espoused the unconstitutionality of the War Powers Act, all have complied with the legislation with the exception of the Kosovo War in 1999 and the 2011 bombing of Libya.  Even in the highly politicized environments before both Iraq Wars, Presidents George H.W. Bush and George W. Bush first sought Congressional approval for military action.

Historically, the President has enjoyed a fair amount of autonomy in the exercise of diplomacy; only the Senate was given a limited role in treaty ratification and Ambassadorial appointments.  Through history, Congress as a whole has rightfully gained a strong voice on foreign affairs.  However, the opprobrium during negotiations with Iran strays far from both the Founders’ intentions regarding diplomacy and the example of recent history.

Even with a strong pro-Taiwan lobby in the Congress, there was little opposition to Nixon’s shift from Nationalist Taiwan to Communist Mainland China.  Because it was seen as part of the broader Cold War balance of power, and as a potential avenue to regional peace, Congress actually supported the President’s diplomatic efforts in Southeast Asia and later legislated that the recognition of Communist China would not prevent the United States from coming to the defense of Taiwan.

No one denies that it is within the prerogative of Congress to debate the merits of the Iran deal, and to try to block it if a majority of members believe it unwise.  However, our leaders must also be careful to ensure that they do not project an image of divided government, where foreign leaders can play one faction off another.  That weakens a United States that used to at least pay lip service to the idea that politics ended at the water’s edge.

Winston Churchill once said “to jaw-jaw is always better than to war-war.” Today it seems that Congress is far more interested in debating the motives of the President’s willingness to “jaw-jaw” rather than exercise their important role in decisions of “war-war.”  Far from being just a partisan issue, that emphasis raises significant questions about Congress’ ability to uphold the oath of office to support and defend the Constitution, with its carefully enumerated separation of powers.

Putting aside the relative merits of the war against ISIS and the Iran deal, this flip flop in Congress’ traditional role in matters of war and diplomacy should signal to American leaders of all political stripes that the separation of powers dynamic in Washington—particularly on matters of national security—has undergone a major historical shift and is fundamentally askew.

Dan Mahaffee is the Vice President and Director of Policy at the Center for the Study of the Presidency & Congress (CSPC).

Congressman Dan Maffei is a CSPC Senior Fellow, and he represented the New York 25th and 24th Congressional Districts in the 111th and 113th Congresses.