Future U.S. Marines Will Fly This Beast into Battle 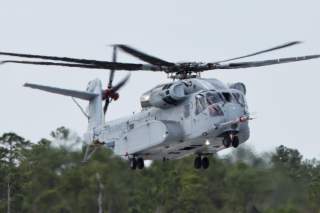 The new "K" model CH-53 helicopter is engineered to lift 27,000 pounds, travel 110 nautical miles, before staying 30 minutes on station and then be able to return under high hot conditions.  The existing “E” model CH-53 can only carry 9,000 pounds.

“This contract will benefit our Marine Corps’ ‘heavy lifters’ for decades to come. Future Marines, not even born yet, will be flying this helicopter well into the future,” U.S. Marine Corps. Col. Hank Vanderborght, Naval Air Systems Command program manager for Heavy Lift Helicopters program said in service statement.

The idea with the helicopter is to engineer a new aircraft with much greater performance compared to the existing CH-53 E or “Echo” model aircraft designed in the 80’s.

Higher temperatures and higher altitudes create a circumstance wherein the decreased air-pressure makes it more difficult for helicopters to fly and carry payloads. “High-Hot” conditions are described as being able to operate at more than 6,000 ft at temperatures greater than 90-degrees Fahrenheit.

An on-board refueling system is engineered into the helicopter to extend mission range in high-risk areas too dangerous for a C-130 to operate, developers said.

The requirement for the “K” model CH-53 emerged out of a Marine Corps study which looked at the combat aviation elements of a Marine Air-Ground Task Force, or MAGTF.

Engineers with the “K” program are using a handful of new technologies to achieve greater lift, speed and performance with the helicopter, including the integration of a new, more powerful GE 38 turboshaft engine for the aircraft.

“Fuel consumption of the engine is 25-percent improved. On a pure technology level it is about a 25-percent improvement in fuel efficiency,” Dr. Michael Torok, Sikorsky’s CH-53K program vice president, told Scout Warrior in a previous interview.

The helicopter is also being built with lighter-weight composite materials for the airframe and the rotorblades, materials able to equal or exceed the performance of traditional metals at a much lighter weight, said Torok.

“Technology allowed us to design a largely all-composite skinned airframe. There are some primary frames titanium and aluminum. Beam structure and all the skins are all composite. Fourth generation rotorblades are a combination of new airfoils, taper and a modification of the tip deflection of the blade.  It is an integrated cuff and the tip geometries are modified to get additional performance,” Torok added.

The helicopter will also be configured with Directional Infrared Countermeasures, or DIRCM, a high-tech laser-jammer designed to throw incoming missiles off course. DIRCM uses sensor technology to identify and thwart fast-approaching enemy fire such as shoulder-fired weapons.

“With the split torque you take the high-speed inputs from the engine and you divide it up into multiple pieces with multiple gear sets that run in parallel,” Torok said.

The K model will be a “fly by wire” capable helicopter and also use the latest in what’s called conditioned-based maintenance, a method wherein diagnostic sensors are put in place to monitor systems on the aircraft in order to better predict and avert points of mechanical failure.