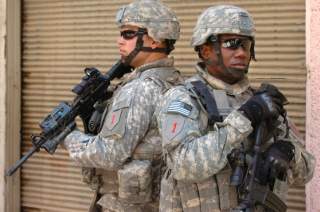 Jules Hurst’s recent article on War on the Rocks entitled “An Infantry Squad for the 21st Century” is a prescient look at where we need to focus on squad development. The Maneuver Center at Fort Benning refers to the infantry squad as the “foundation of the decisive force” and the smallest maneuver unit on the battlefield. But more importantly, as in time immaterial, the infantry soldier stands at the center of the battlefield and all arms are arrayed around him or her to force the adversary to our will.

The power of the infantry squad is fundamental to our power as a military force. What we have found over the past 15 years of war is that the US military is unmatched in its ability to identify, engage and destroy the enemy with dispatch. Unless you are in an isolated light infantry squad far from support of other arms. We have found in places such as the Ranch House and Wanat is that an unsophisticated enemy equipped with two way radios, the AK-47 and the RPG-7 can engage and threaten American infantry in fights that last hours upon hours. What the American rifle squad needs now is a firefight ending capability. And the technologies exist. The American Soldier is capable of doing it. We just haven’t provided the squad the capability.

We must equip the squad today with more powerful and lethal weapon systems. The XM-25 counter defilade weapon system is a prime example. We have the system in the inventory, but far from enough of them. And yes it is expensive. But the tradeoff is the hour-long lead-bullet on concrete wall battle that we see today instead of the “hey, the dude shooting at us is behind that wall….OK, done” conversation that a grenadier and a team leader would rather have in contact with the enemy. Additionally, we are beginning to field the Carl Gustav recoilless rifle to our light infantry companies, and while this improves their firepower and is welcome, it only equals the enemy’s prevalent use of the RPG-7.  Don’t get me wrong, it’s better than nothing, and couple with carbine, automatic rifle, machine gun fire, 40mm grenade and XM-25 fire it is welcome!

In addition to firepower, we need to make our squads “smarter” by increasing their situational understanding. Bandwidth to the tactical edge has been toyed with in the limited fielding of Nett Warrior. The squad leader can hold onto a smartphone like device to share information across and up while receiving updates from higher to increase the squad’s situational understanding. Our ability to provide 4G bubbles over the battlefield exists now. We should buy it. We should enable our infantry squads with info and more importantly get that info from them to higher to inform battlefield commanders better.

Hurst writes about the use of robots and how that is a game changer. It may be in 10 or 20 years but not quite yet. But, no US squad should operate on a battlefield without a suite of small UAVs such as the “black hornet” or like system to provide an aerial view of the squad’s surroundings. They should also have the equivalent unmanned ground systems, especially in the defense for early warning and reconnaissance.  These systems should be networked through the Nett Warrior like device to build that situational understanding linked back to aviation and fires and down to the individual squad members.

To fully benefit from the situational understanding being broadcast over the bandwidth back from the tactical edge, we must link it to our reconnaissance and fires. We must enable our squad leader’s quicker access to fires and, not only cannon and rocket, but Joint fires. Systems like Mafia already provide this user-friendly capability (I’m not saying buy that one – but get something like it now!) We need to break down the barriers to the employment of Air Force fires so that the Army squad has at least the same responsive air delivered fires that the Marine squad has today.

We all know that the American infantry squad does not operate alone. It is our responsibility to provide the additional capabilities that make the squad incredibly powerful. For our Stryker mounted squads the Army is already moving forward with a program to upgun some Strykers to 30mm cannon from the World War One era 50 caliber machinegun they currently mount. Now, the Browning 50 Caliber is a tremendous weapon, but it limits our Stykers to engaging other machineguns in an equal match – each gunner trying to place a solid piece of metal on another solid piece of equipment or a person at a range out to a little over a kilometer. It makes absolute sense to employ a weapon that fires a projectile that explodes. Exploding shells do greater damage over a greater distance than solid shot – a lesson known to Napoleon. We should expand upon the little General’s understanding of “things that blow up” to give our Infantry the same benefit. Allow all of our formations to employ a mix of weapons from machine guns to cannon to suppress or destroy enemies and restore mobility to our squads in close proximity to enemy infantry, infantry carriers and vehicle killing systems.

What we need in our squads today, to bridge the gap from today to Hurst’s future, are the fire fight ending capabilities that we already have available to us if we just make the decisions to get them. We need weapons that defeat our AK-47 and RPG armed foes such as the XM-25 and the Styker armed with the 30mm cannon. We need fires enabled by bandwidth to the tactical edge, guided by our handheld devices, networked across our formations to provide the situational understanding to enable rapid decision making.

The American Infantry Squad is the foundation of the decisive force. It is the best of its kind in the world. But it isn’t enough. We should not stand for half day long firefights with primitive foes. We need squads that are devastating and immediately impose the overmatch that only American training and equipment can provide. We need our Squads not to engage in long struggles, we need them to END firefights. Immediately. That is what the American Squad needs – fire fight ending capabilities. And we can do that today.