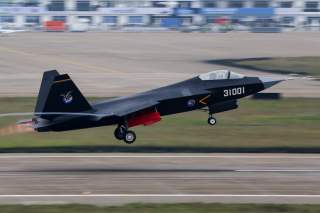 According to IHS Jane’s analysis of Airbus Defence and Space satellite imagery taken last month, China is building a new air strip on the Fiery Cross Reef, which is one of the reefs that Beijing has transformed into an island through its reclamation efforts. When completed, it will serve as China’s first air strip in the Spratly Islands, which are also claimed by Taiwan, Vietnam, the Philippines, Malaysia and Brunei.

“The 23 March images show a paved section of runway 503 m by 53 m on the northeastern side of Fiery Cross Reef, which China began to turn into an island in late 2014. Paving and ground preparation of other sections of the runway has also begun further along the island. In addition, workers have paved about 400 m by 20 m of apron,” James Hardy, the author of the IHS Jane’s article, notes.

Hardy goes on to note that because of the reclamation efforts, Fiery Cross Reef is now capable of hosting an air strip of around 3,000 meters. This is well within the bounds of the People’s Liberation Army’s air strips on mainland China, which Hardy notes range anywhere from 2,700 meters to 4,000 meters at most, according to Hardy. Similarly, China is currently upgrading runway on Woody Island in the Paracel Islands, lengthening it from 2,300 meters to 3,000 meters.

Nor is this all China has been up to in the Spratly Islands as of late. The same satellite imagery shows that China is continuing dredging work on Fiery Cross Reef, in order to build a harbor on the artificial island. Moreover, China’s reclamation efforts on Subi Reef continue unabated, with all signs suggesting that Beijing intends to also transform that reef into an island large enough to hold another 3,000-meter airway.

“Airbus imagery taken of Subi Reef – also in the Spratlys – on 6 February and 5 March shows land reclamation on this site too,” Hardy notes in the report. “The 6 February image shows three islands being created. By 5 March, at least nine dredgers are creating larger landmasses on the reef that if joined together could create enough land for another 3,000 m-long airstrip.”

All of these efforts will expand the PLA and Chinese Coast Guard’s ability to patrol the South China Sea. Beijing most likely intends to ultimately declare an Air Defense Identification Zone (ADIZ) in the South China Sea, much like it did in the East China Sea in November 2013.

The United States has repeatedly warned China against taking this course of action. For example, while in the Philippines in December 2013— just a month after China established its first ADIZ in the East China Sea— Secretary of State John Kerry said:

Today, I raised our deep concerns about China’s announcement of an East China Sea Air Defense Identification Zone. I told the foreign secretary that the United States does not recognize that zone and does not accept it. The zone should not be implemented, and China should refrain from taking similar unilateral actions elsewhere in the region, and particularly over the South China Sea.