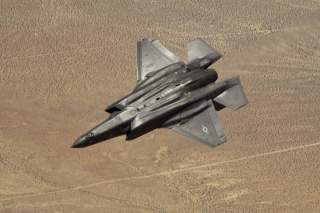 Integrating the stealthy new fighter into the NIFC-CA network will allow the jet to provide over-the-horizon targeting for Aegis cruisers and destroyers to defeat incoming threats. Moreover, the F-35 will be able to provide targeting data to the rest of the fleet from inside a zone defended by advanced Russian or Chinese air defense systems such as the S-400 or HQ-9.

"This test was a great opportunity to assess the Navy’s ability to take unrelated technologies and successfully close the fire control loop as well as merge anti-surface and anti-air weapons into a single kill web that shares common sensors, links and weapons," said Anant Patel, a Navy program manager for future combat systems in the Program Executive Office for Integrated Warfare Systems (PEO IWS), in a statement.

During the live-fire test—which took place on Sept. 12 at the White Sands Missile Range in New Mexico—a U.S. Marine Corps F-35B acted as an off-board sensor to detect an over-the-horizon threat for a shore-based Aegis test-rig called USS Desert Ship (LLS-1). During the test flight, the F-35B operational test aircraft demonstrated that it could relay data via its Multi-Function Advanced Data Link to a ground station linked to Desert Ship. The land-based test facility—which is equipped with the latest Aegis Weapon System Baseline 9.C1 configuration—successfully engaged the target—likely a cruise missile—using a Raytheon SM-6 missile.

While the test demonstrated the F-35’s ability to tie into NIFC-CA in order to relay data to the Aegis system in an anti-air capacity, the battle network is key to the Navy’s strategy to defeating so-called anti-access/area denial threats in the West Pacific, the Baltics or Eastern Mediterranean. Indeed, while originally designed as anti-aircraft and anti-ballistic missile weapon, the SM-6 has formidable long-range anti-ship capabilities at extended ranges. The combination of the F-35, Aegis and NIFC-CA would allow the Navy to target even the most capable enemy surface combatants (which have formidable air defenses) such as the Russian Project 1144 Orlan-class—better known as the Kirov-class—at range.

“NIFC-CA is a game changer for the U.S. Navy that extends the engagement range we can detect, analyze and intercept targets,” said Dale Bennett, executive vice president, Lockheed Martin Rotary and Mission Systems, said in a statement. “The F-35 and Aegis Weapon System demonstration brings us another step closer to realizing the true potential and power of the worldwide network of these complex systems to protect and support warfighters, the home front and U.S. allies.”

Perhaps more significantly, the F-35/NIFC-CA combination would allow the stealthy Joint Strike Fighter to relay targeting data from inside a zone protected by systems such as the S-400 to the rest of the carrier strike group. While the Navy’s carrier-based F-35C won’t be able to carry an enormous payload, its primary role within the strike group will be to provide the critical targeting data needed for the service’s standoff weapons.

Using the F-35’s targeting data, a Boeing F/A-18E/F Super Hornet, EA-18G Growler, Aegis cruiser or even a submarine could launch a long-range missile to eliminate the target. But exactly how the Navy will integrate the F-35 into its operations is a work in progress. “It is still yet to be determined as we continue to learn to integrate these capabilities into the air wing,” Rear Adm. (Upper Half) DeWolfe Miller, the service’s director of air warfare told The National Interest earlier. “I’m very confident in the capabilities of the F-35.”

The recent Navy and Marines Corps test is an important first step toward the air wing of the future. “This test represents the start of our exploration into the interoperability of the F-35B with other naval assets,” said Lt. Col. Richard Rusnok, VMX-1 F-35B detachment officer in charge. “We believe the F-35B will drastically increase the situational awareness and lethality of the naval forces with which it will deploy in the very near future.”