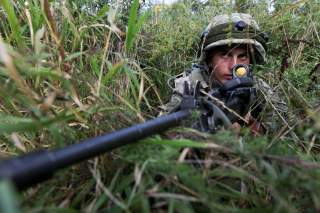 Georgia and America are celebrating twenty-five years of diplomatic relations and remarkable partnership. Georgia is an emerging democracy in a difficult region with mainly authoritarian regimes nearby. This and its location as a continental transport hub give it strategic importance. Georgia faces severe challenges from Russian military occupation and economic weakness, and to surmount them it deserves sustained Western support.

At its modern independence in 1991, Georgia was beset by civil wars, weak governance and poverty. Former Soviet foreign minister Eduard Shevardnadze returned from Moscow to lead the country. He could not avert Russian intervention in separatist conflicts in Abkhazia and South Ossetia, but did neutralize warlords and foster a more open political system and a westward-leaning foreign policy. Over time, amid corruption and rigged elections, he lost reform steam. In 2003, in the peaceful Rose Revolution, the young, U.S.-educated Mikhail Saakashvili ousted him.

Saakashvili eliminated much corruption, sped reforms and strengthened state institutions. Under his presidency, Georgia improved in Transparency International’s corruption perceptions index from 124th from the top (least corrupt) in 2003, to fifty-first place in 2012. In 2008, however, shortly after NATO denied a Membership Action Plan for Georgia but said it “will” become a member, Saakashvili succumbed to a Kremlin provocation and stumbled into a brief—but disastrous—war with Russia. Russia’s military now occupies Abkhazia and South Ossetia.

In the last quarter-century, civil society and democracy in Georgia have taken firmer root. When Saakashvili’s party in 2012 lost parliamentary elections, the Georgia Dream coalition took power peacefully. Bidzina Ivanishvili, a reclusive billionaire who funds it, plays a behind-the-scenes political role. His choice for president, the U.S.-educated Giorgi Margvelashvili, won election in 2013 and is a unifying and reformist voice. Prime Minister Giorgi Kvirikashvili is an able technocrat.

Russia’s war has caused Georgia to accelerate its push to the West. Last year a major Association Agreement with the European Union entered into force. Georgia showed courage; in 2014, Russia intervened in Ukraine in a failed attempt to prevent its closer alignment with the West. Georgians now enjoy visa-free travel to the Schengen Area, a popular benefit. Striving to join NATO, Georgia is the largest per capita contributor to the alliance’s contingent in Afghanistan.

Georgia’s trajectory is positive, but challenges remain. With a super majority in parliament, Georgian Dream seeks constitutional changes. Since some are controversial, broad support and public discussion should precede any changes. Freedom of the press is substantial, but tested by a court battle over ownership of an opposition-controlled television channel, Rustavi II. The case raises concerns about judicial independence and political tolerance. Acceptance in parliament of the concept of a loyal opposition is tenuous.

Economic growth has picked up, but per capita GDP it is less than half that of Georgia’s large neighbors, Russia and Turkey. Agriculture, despite rich potential, suffers from the absence of laws allowing a market for buying and selling land. Too many people do low productivity work on farms.

With vibrant Black Sea ports and land transport links to Turkey, Georgia is a crucial export route for Caspian oil and gas, mainly via pipelines through Georgia from Azerbaijan and on to Turkey. China is investing in New Silk Road transport infrastructure, and Turkish trucking helps connect the South Caucasus and Central Asia.

Georgia refuses diplomatic relations with Moscow since the separatist territories are occupied, but it has resumed cooperation on trade, communications and migrant worker visas. A deepening of pragmatic ties would help Georgia, but advocates for it are unfairly slandered.

Georgians worry that Washington, DC is averting its gaze, or might cut a deal with Moscow at their expense. They should be reassured by the strong and bipartisan congressional support for Georgia. President Trump’s May 8 meeting with Prime Minister Kvirikashvili also helps. U.S. reassurance would be put in jeopardy, however, if the Trump administration’s promised “dramatic” cuts in fiscal year 2018 foreign aid were to slash support for Georgia. This could make it more vulnerable to pressure from Russia, and abet Moscow’s claims that NATO and the European Union care little for it. Georgia is better able to deter Russian threats because of U.S. military training and their combat experience in Afghanistan and Iraq.

Washington should also see Georgia as a link in its counterterrorism and ISIS fight. As ISIS and other insurgent groups in the Middle East are squeezed, some fighters from the Russian North Caucasus may traverse Georgia on their way home. Tbilisi and Washington apparently have agreed to share information on these threats, and could work with Russia if it is willing to contribute. Such practical cooperation should be welcomed by all parties.

Western support is vital to reassure Georgia and spur reforms. This is no time for America to let down a promising new democracy facing a revisionist neighbor.

Kenneth Yalowitz is the director of the Conflict Resolution Program at Georgetown University and a Global Fellow of the Woodrow Wilson Center, and was U.S. ambassador to Belarus and Georgia. William Courtney is an adjunct senior fellow at the nonprofit, nonpartisan RAND Corporation, and was U.S. ambassador to Kazakhstan, Georgia, and a U.S.-Soviet Commission that implemented the Threshold Test Ban Treaty.

Image: A Georgian soldier at the Joint Multinational Readiness Center in Hohenfels, Germany. Flickr/Department of Defense