Is Germany Getting Ready to Build Its Very Own Stealth Fighter? 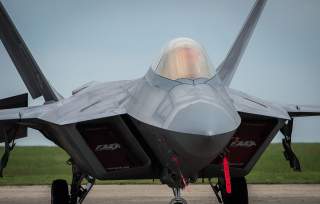 Germany and Airbus Defense and Space are working on the initial stages of a new program to replace Berlin’s long-serving fleet of the Panavia Tornado bombers and complement the Luftwaffe’s Eurofighter Typhoon air superiority fighters.

The Future Combat Air System (FCAS)—as the Bundeswehr program is called—would likely be a system of systems that combines manned and unmanned elements. According to a report in Jane’s, the Bundeswehr’s requirements are aiming for the FCAS to be operational in the 2030-2040 time frame. Thus, Airbus is focusing on the best technologies that would available for an aircraft that could be ready by then.

"The German government asked Airbus to consider alternatives for a Tornado replacement that will be complementary with the Eurofighter,” Alberto Gutierrez, head of the Eurofighter program told my former colleague Gareth Jennings last year.

“In principle, it could be a system of systems - either a manned and unmanned combination. [We have determined that unmanned combat air vehicles] UCAVs will not be at technology state ready by 2030-40 to support Eurofighters. It could be optionally manned, with two crew - one for command and control [and one pilot].”

Because of the relatively short timelines involved, the Germans will try to use as many existing technologies as possible for their program. Early concept drawing of the FCAS seem to indicate that the new German aircraft will be twin-engine stealth aircraft similar in concept to other fifth-generation fighters that are starting to emerge around the world.

It’s not clear if the Germans will team up with other European nations to develop the FCAS or even if the Bundestag will appropriate enough money to see the program through to fruition, but Berlin does have the technical wherewithal to develop its own aircraft. The German aerospace industry has not produced a full-scale combat aircraft since the end of the Second World War, but the country has an advanced industrial base and could reconstitute such a capability relatively quickly. It’s really just a matter of if Germany wants to spend more money on defense.