Get Ready, America: China is Trying to Sell Its Lethal J-31 Stealth Fighter 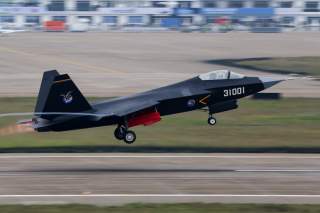 Aviation Industry Corporation of China (AVIC) is making an aggressive push to sell its J-31 stealth fighter to international customers at the Dubai airshow. AVIC intends to fly a production version of its “Gyrfalcon” by 2019. The aircraft could become operational as early as 2022. Full operational capability would follow roughly three years later—but that’s all contingent upon finding a customer.

But the Chinese company faces obstacles in its quest to export the twin-engine F-35 knock-off. The problem is that China is still largely dependent on Russian jet engine technology because it has consistently failed to develop reliable indigenous propulsion technology of its own.

“Engines are still a problem area for China's industry,” aerospace industry consultant Richard Aboulafia of the Virginia-based Teal Group told me.  “So much of an aircraft's performance... Reliability, speed, time-to-climb, stealth, etc., is heavily dependent upon having world-class jet engine technology, so it's the wrong place for an aspiring weapons exporter to have a weak spot.”

China is working on jet engine technology. But Beijing has not yet mastered propulsion technology that would allow its products to compete on the international marketplace independent of Russian largesse. The Russians supply the engines for most of China’s offering like the FC-1 Xiaolong—which is also known as the JF-17 Thunder. The JF-17 is powered by a single 19,000lbs thrust-class Klimov RD-93 afterburning turbofan that was derived from the MiG-29’s RD-33 engine.

However, the Chinese are known to be working on an indigenous replacement for the RD-93 on the JF-17 called the Guizhou WS-13. The indigenous motor—should it prove to be viable—has slightly more thrust than the Russian engine. A prototype JF-17 has flown with the new engine according to Chinese officials who spoke at the Paris air show. However, given the Chinese track record on developing efficient and reliable engines, Beijing probably has a long way to go before the new motor is ready for prime time.

Nonetheless, if the Chinese are truly close to perfecting a production ready WS-13—as some in the Pentagon claim—then that engine could be developed into a propulsion system for the J-31. The current J-31/FC-31 prototype—like the JF-17—is powered by the Russian RD-93. Indeed, Chinese officials speaking to reporters at the Dubai airshow indicated that the production FC-31 would be powered by a Chinese-made  “advanced medium thrust engine” producing roughly 20,000lbs of thrust.

But the Chinese made other claims that may stretch the truth. According to Aviation Week, Lin Peng, AVIC’s chief designer for the FC-31, claimed the jet would have “multi-spectrum, low-observability characteristics” effective against L-band radars—which given the physics—seems somewhat dubious. It’s not clear how effective China’s stealth technology is—however, U.S. officials said that it’s not likely to match the F-35’s low observable capabilities.

Moreover, Lin said foreign export customers would be able to customize their jets with their own sensors, weapons and communications systems. But the J-31 would come with a host of Chinese-developed weapons including the PL-9 dogfighting missile, SD-10A (PL-12) medium-range air-to-air missile and Beijing’s version of the small diameter bomb. The jet will have a total payload of 17,600lb, 4,400lbs of which would be carried internally in its weapons bays. The J-31 will have a combat radius of 448 nautical miles with internal weapons and a maximum takeoff weight of 55,000lbs.

If Beijing buys the J-31 for its own use, it would likely boost the confidence of potential export customers and could provide China with a market opening. But right now, the J-31 is looking for its first customer. Only time will tell if AVIC will make a sale—and if China has finally developed a workable engine.