Get Ready, America: Russia and Iran are Getting Closer 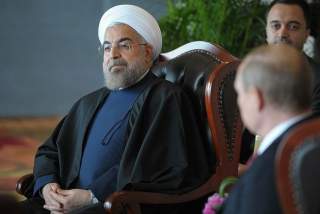 The recent Russian and Iranian escalation in Syria took many observers by surprise. Their coordinated campaign supporting President Bashar al Assad could represent a fundamental shift in Middle East geopolitics, or simply their exploitation of a tactical opportunity. As dramatic as the Russian intervention on behalf of Iran’s closest ally is, it must be viewed in the context of a potentially larger shift in Tehran’s strategy towards Moscow.

As we have discussed previously, the Iranian-Russian alignment in Syria is not a seamless convergence of goals, yet Iranian officials have taken pains to portray themselves as equal and willing partners. Iran’s Parliament Speaker Ali Larijani emphasized that Russia had “consulted” with Iran prior to beginning air strikes, later praising Moscow’s “realistic vision” on Syria. On October 27, following repeated indications Iran was willing to intensify its military contribution, the Islamic Revolutionary Guard Corps announced an increase in the number of Iranian advisors deployed to Syria. Tehran will hope that Iranian trained ground forces—in combination with Russian air power—will be able to reverse recent opposition gains.

The rise in Iran-Russia defense cooperation goes beyond operations in Syria, however. Iran’s Artesh Navy Commander Rear Admiral Habibollah Sayyari’s July announcement of a draft of the long delayed Caspian Sea Treaty, along with an Iranian naval flotilla visit to Astrakhan, Russia on October 21 are part of a longer and broader trajectory of increasing defense ties. (Astrakhan is the headquarters for Russia’s Caspian Flotilla, which fired cruise missiles into Syria on October 7.) This coordination extends to domestic security issues, too. The Deputy Commander of the Tehran Law Enforcement Forces (a public security force sanctioned by the United States for human rights abuses during the regime’s June 2009 crackdown on protesters) visited Moscow this summer, and several defense and security deals have been concluded in recent months. In August, two Russia companies signed an MOU to establish a satellite observation system for Iran, and Russian firms are interested in importing Iranian drone technology (technology reportedly in use against opposition forces in Syria).

Beyond defense relations, the past decade of sanctions have many in Tehran looking to avoid the recurrence of economic isolation should the nuclear deal collapse. Iran’s Foreign Minister Mohammad Javad Zarif argues strong economic linkages with Iran’s neighbors can prevent the re-emergence of a cohesive international coalition capable of isolating Iran’s economy from the global marketplace. Zarif clearly articulated this position is a speech on October 20:

“If we want to ensure that no country is able to strike our country with sanctions again, we must…bring about conditions of such a type that the world economy is so entangled with our economy that other countries do not have the power to sanction us.”

“Entangling” the economy of Russia, given Russia’s military influence and role as a member of the P5, is a key element of Iran’s post-deal economic strategy. (It will be interesting to see who else Iran intends to entangle. Germany? China? Japan?) Iran has announced plans for Russian companies to construct two nuclear power reactors along its southern coast, and Rouhani’s administration continues to push for increasing bilateral trade. This summer, Iran’s sanctioned shipping company, IRISL, launched a direct shipping line connecting Iranian and Russian ports in the Caspian Sea, and Iran’s Chamber of Commerce announced an agreement to begin direct flights between Mazandaran, Iran and Astrakhan. During Russian Energy Minister Alexander Novak’s recent trip to Iran, the Iranians pulled out all the stops in an effort to ensnare Russian capital. Iran reportedly pitched 121 projects to the Russian delegation, culminating in $35 to $40 billion in long-term investment contracts, plans to establish an “Iran-Russia Cooperative Bank”, and Iranian membership in the Russian-founded Eurasian Development Bank. Iran’s Deputy Petroleum Minister Amir Hossein Zamaninia explained, “Russians know how to do business in Iran, and we hope the visit will bear positive results.”

Iran is also bringing Russia intimately into the implementation of the JCPOA. On October 20, Atomic Energy Organization of Iran Head Ali Akbar Salehi confirmed Iran will sell its stockpile of enriched uranium to Russia, and receive natural uranium in return. Russia is also expected to participate in providing nuclear fuel for existing reactors, and Salehi previously commented on plans for Russian cooperation to improve Iran’s existing centrifuge designs.

The United States should be working to prevent a new Moscow-Tehran axis from frustrating execution of the nuclear deal, or further challenging Western and allied interests in the Middle East. Washington should be smart about what is likely to be a fraught alliance though. Russian and Iranian mutual mistrust runs deep, and their strategic goals do not mesh much beyond pushing American influence from the region. This is partnership of unequals, and Vladimir Putin is no fool. Ayatollah Khamenei should be asking who will end up entangling whom.

J. Matthew McInnis is a resident fellow at the American Enterprise Institute (where this first appeared). Tara Beeny is a research assistant at the American Enterprise Institute. This report was produced in cooperation with the Iran Team of the Critical Threats Project. It analyzes the most important Iran news events of the past week and provides an outlook of the regime’s strategic calculus.