Get Ready, America: Russia Will Soon Deploy an Air Defense System Better Than the S-300 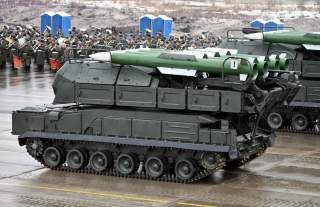 The Russian military is expected to receive its first operational 9K317M Buk-M3 surface-to-air missile system next month. The new highly mobile air and missile defense system—which will be used by the Russian Ground Forces as part of its maneuver units—is more capable than some versions of even the much-feared S-300 family.

The new weapons are expected to be delivered to the Russian military this November, according to the BMPD blog—a product of the Moscow-based Centre for the Analysis of Strategies and Technologies. However, as the blog notes, the first Buk-M3 has already been spotted operating with the Russian Ground Forces in Ulyanovsk region where the system is built.

Though designed to accompany and defend Russian Ground Forces formations from air attack as they advance, the Buk-M3 offers performance that is superior to the S-300P and is capable of engaging targets such as short-range ballistic missiles. “The results of the state tests indicate that by a number of its characteristics the [Buk-3M] system has fully complied with the technical requirements and equaled the S-300, and by some of the parameters has even surpassed this system,” a Russian defense ministry official told the Moscow-based TASS news agency. “First of all, the Buk-M3 target-destruction probability has reached 0.9999, which the S-300 system does not have...This means that the system is surely capable of destroying a target with one missile.”

The new 9M317M missile has a maximum range of up to 70 km—about 43 miles—and minimum range of 2.5km or roughly 1.5 miles. It can hit targets as high as 115,000ft or a low as 50ft. The missile uses a blast-fragmentation warhead and can be used against surface targets in extreme situations. Overall, it is an extremely formidable weapon system.