Get Ready, America: Russia's Bomber Force Could Soon Be the Ultimate Weapon 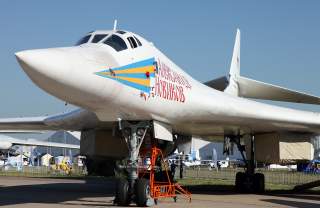 Right now, Russia relies primarily on its Kalibr cruise missile equipped submarines to launch long-range precision conventional strikes. However, the introduction of modernized bombers equipped with the stealthy long-range Raduga Kh-101 cruise missile and its nuclear Kh-102 nuclear-tipped counterpart has afforded the Kremlin with a more responsive weapon. Moreover, it allows Russia—which started to rely heavily on nuclear weapons to guarantee its security—the decrease its reliance on such weapons.

“The Tu-160M and Tu-95MS strategic bombers are undergoing a scheduled modernization, “Russia’s chief of the general staff Gen. Valery Gerasimov said at the Russian Defense Ministry’s November 7 board session.

“The aircraft are being equipped with more powerful engines. On-board equipment is to be adjusted for a domestic element base, range of weapons is getting wider. Moreover, a long-range air complex is being developed.”

The modernized aircraft are key to weaning post-Soviet Russia off its dependence on nuclear weapons. “Non-nuclear deterrence forces have gained high momentum. Over the last five years, the Armed Forces have made a breakthrough in long-range high-precision weapons,” Gerasimov said. “Long-range aircraft are being upgraded to operate the new Kh -101 cruise missile.”

Indeed, by some measures, the Russians are at the turning point now.

“We are already at the turning point without hypersonics, because we have Kalibr and—even more—we have the X-101 air launched cruise missile with a huge, unrivalled range of 4500km,” Vasily Kashin, a senior fellow at the Center for Comprehensive European and International Studies at Moscow’s Higher School of Economics told The National Interest.

“The X-101 plus strategic bomber combination gives you a kind of global strike capability, although it is slow.”

With the addition of the Kh-101 (Kh is the transliteration of the Cyrillic letter X—which is pronounced as an H), Russia’s bombers can supplement and even replace the Kremlin’s submarine force as its main long-range strike weapons. “It can to some extent replace the Navy,” Kashin said.

“That I think is the reason behind the investment in Tu-160M2 program. They would be able to deliver a huge simultaneous cruise missile strike across the globe.”

Meanwhile, Russia is continuing to invest in hypersonic weapons, which should further help to reduce Moscow’s reliance on its nuclear arsenal.

“Due to the gained momentum in high-precision weapons and current research in hypersonic missiles, main part of strategic deterrence tasks can be transfer from nuclear to non-nuclear sphere,” Gerasimov said.

Russia has made progress in developing the Zircon hypersonic anti-ship missile, the weapon a relatively short-range anti-ship weapon. The prospect of a new non-nuclear long-range strategic weapon is fairly remote in the short term.

“I think that non-nuclear hypersonic strategic weapon is still far away,” Kashin said.