Get Ready, China: America to Base Stealth Bombers in Asia? 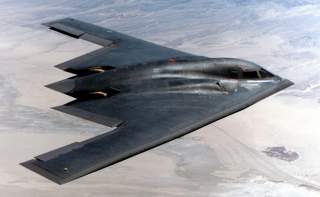 During March, the U.S. Air Force deployed three of its twenty B-2 stealth bombers to the Asia-Pacific region for training. But should the United States consider permanently basing stealth bombers in the region?

In the case of the B-2, logistically it would probably not make any sense to permanently base the aircraft overseas with only twenty aircraft in the total fleet. However, the Pentagon hopes to buy between eighty and 100 new Northrop Grumman B-21 Long Range Strike-Bombers (LRS-B) in the 2020s. As China's power continues to grow, there is a case to made for basing some number of those aircraft in the region.

While American bases in Japan, South Korea and Guam might be vulnerable to Chinese missile attack, if the United States based B-21s in Hawaii, Alaska and Australia, it would shorten the distance those aircraft would have to travel. That would in turn increase sortie generation rates while also reducing the need for tankers if there were ever to be a conflict in the region. That would in turn increase the B-21’s deterrent effect. Basically, shortening the flight time has the same effect as increasing the fleet size.

Basing the B-21 in Alaska or Hawaii would not be a problem—those are on American soil. Both Hickam AFB in Hawaii and Elmendorf AFB in Alaska already host Lockheed Martin F-22 Raptors and have facilities for maintaining stealth aircraft. The Air Force also hopes to station Lockheed Martin F-35 Joint Strike Fighters in Eielson AFB, Alaska, which will also have facilities to maintain stealth aircraft. However, the addition of a large stealth bomber contingent would mean the Air Force would have to expand those bases to host the new B-21.

Basing the B-21 alongside the F-22 and F-35 in the Asia-Pacific region would allow America’s stealth platforms to operate and train together routinely. That would increase the pilots’ familiarity with each others’ tactics and procedures—meaning those aviators would be that much more effective in the event of war. Basing the aircraft in Alaska has the added benefit of access to vast training ranges and the 18th Aggressor Squadron—which makes for more realistic training.

Basing the jet is Australia is somewhat more difficult since Canberra might not necessarily wish to host a unit of B-21s—China is Australia’s largest trading partner. But assuming the Australians agreed to host the stealth bombers, that would open up the possibility of combined training with Canberra’s forces and with those of other regional allies. Australia has vast open spaces for training and it plans to purchase the F-35—which opens up many possibilities.

Long-term, as Beijing grows increasingly powerful and assertive, short-range tactical fighter bases in Japan and South Korea will be increasingly vulnerable to concerted attack. Even Guam is probably not safe. However, Australia, Alaska and Hawaii—while not invulnerable to attack—are relatively safer from a Chinese attack in the event of a war. Thus, the Pentagon should consider the basing the B-21 at Hickam, Elmendorf and Eielson when the bomber becomes operational.