Get Ready, China: America Is Upgrading Its Missile Defenses 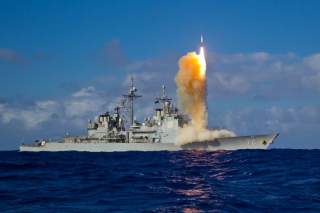 While most folks were getting ready to head out for Labor Day barbeques, American defense planners were preparing what could be a big upgrade of U.S. missile-defense platforms on the high seas.

In a press release last Friday by Lockheed Martin, the company detailed a new contract worth as much as $428 million over ten years to modernize the highly respected U.S. Navy Aegis Combat System’s hardware and software. And the timing could not be any better considering the news coming out of Asia these days.

Lockheed explained in its release that the upgrades, or the Ship Integration & Test (SI&T) program, “will will integrate Aegis onboard new Arleigh Burke-class destroyers, and modernize destroyers and cruisers to operate the latest iteration of the Aegis configuration, called Baseline 9.”

This is where things get interesting. The release continues, noting that: “[T]hrough Baseline 9, ships can simultaneously defend against airborne threats, such as aircraft or cruise missiles, while also targeting and intercepting ballistic missiles. It is the only naval combat system in the world to demonstrate the ability to conduct integrated air and missile defense simultaneously.”

Defending against multiple types of threats such as cruise and ballistic missiles simultaneously is a big deal and an important upgrade for AEGIS.

When one considers the possible threat environment, especially in the Asia-Pacific, U.S. naval assets in any contest against China would face challenges from both cruise and ballistic missile coming from multiple different domains (air, land and sea). Being able to take on several different types of threats at once is clearly of major importance—especially as anti-access/area-denial (A2/AD) challenges seem to keep multiplying as the years go by (think Russia, North Korea, Iran and others).

“When a ship goes into harm’s way, the combat system must work 100 percent of the time – there is no margin of error,” explained Chris Minster, SI&T senior program manager of Lockheed Martin Mission Systems and Training. “Whether it is designing a system for a brand new ship or working hand-in-hand with sailors pierside, Ship Integration and Test is there to deliver.”

A Timed Release of Information?

Considering China’s recent display of a new and longer-range “carrier-killer” missile, the timing could not be any better. U.S. naval assets will likely now have to plan for dealing with anti-ship threats that could strike vessels up to 2,500 miles away, complicating America’s ability to project power and deter challenges now and in the future. And while the upgrades to AEGIS certainly won’t negate the increased range of Beijing’s anti-ship weapons, any missile defense upgrades at this point are a welcomed move.

As Andrew Erickson noted in a fantastic piece that detailed Beijing’s display of not one but two “carrier-killer” missiles, the DF-26 is noteworthy for its increased range beyond the much-discussed DF-21D:

“Official commentary elaborated that the DF-26 is “capable of targeting large- and medium-sized targets on water” (打击大中型水面目标). This “Guam Killer” missile is credited with 3,000-4,000-km (1,800-2,500 mile) range, sufficient to strike U.S. bases on Guam. The set of sixteen DF-26 missiles was further described as the “Conventional-/Nuclear-capable formation. The DF-26 can perform medium-to-long-range precision attack on both land and large-to-medium-sized maritime targets. A new weapon for strategic deterrence” (核常兼备导弹方队, 东26能对陆上重要目标和海上大中型舰船实施中远程精确打击, 是我军战略威慑力量体系中的新型武器).”

So the real question: Was the timing of this press release just coincidence or a response to news from Beijing? In any event, the security dilemma between the United States and China seems only to be gaining momentum.