Get Ready, China: America's Lethal B-1 Bomber Might Have a New Home 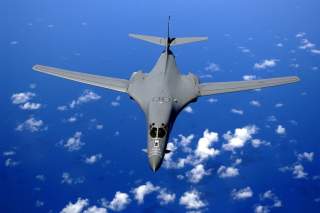 Greg Sheridan writes recently that, despite last week's controversy when Pentagon official David Shear 'misspoke' about U.S. Air Force's B-1 bombers being placed in Australia, the bombers are probably coming to Australia anyway.

I think that's right. As James Brown wrote at the time, the U.S.–Australia Force Posture Agreement hammered out in 2014 ensured that:

...U.S. Air Force rotations through northern Australia should increase, assuming the force posture agreement clears the way for the expansion of runways and ramp space at RAAF Learmonth and RAAF Tindal. Australians should expect to see more USAF long-range bombers, transport aircraft, and air-to-air refuelers operating from those locations.

We're in the realm of wordplay here. The U.S.-Australia Joint Defense Facility at Pine Gap is not really a 'base', but it is a permanent facility run by Australia and various U.S. spy agencies. And while the U.S. Marine presence in Darwin is described as a 'rotation', with Marines cycling through on short training deployments, it is a permanent arrangement between the two governments. As James Curran explains, this is in fact the culmination of a long-standing desire by Australian governments to entrench the U.S. military presence in Australia.

The Abbott government has no in-principle objection to the presence of B-1 bombers, and many well-informed observers regard their eventual presence in Australia as all but inevitable. The problems the government had with the Shear testimony were about the implication of basing planes in Australia, and connecting the rotations explicitly to China.

Again, I think that's right. The reason the PM came out within hours of the story breaking to deny Shear's testimony was because of the damage it might do to the China relationship.

But this is revealing of our national dilemma, which Tom Switzer describes aptly on the same opinion page today: we have a major trading partner (China) whose strategic interests are increasingly at odds with those of our major ally. And increasingly, we're being forced to choose between them. Yet if Sheridan's account is right, the Government seems to believe that we can get around this dilemma by simply not acknowledging it publicly. We can host U.S. strategic bombers, Sheridan seems to be saying, just as long as we don't say publicly that it's China-related.

Does that sound at all convincing to you? No, me neither.