Get Ready: China Could Build New Artificial Islands Near India 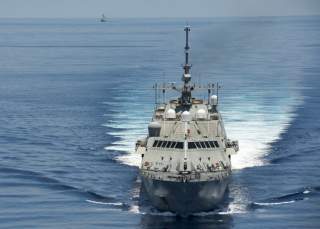 There are growing fears, particularly in India, that China may soon launch an island reclamation project in the Indian Ocean.

The fears stem from a constitutional amendment passed by the small archipelagic nation of Maldives last week, which for the first time allows foreign ownership of Maldives territory. Specifically, the constitutional amendment allows foreigners who invest over $1 billion to own land, provided that at least 70 percent of the land is reclaimed from the sea.

Since July 2013, China has launched a massive reclamation project in the South China Sea that has created 2,000 acres of artificial landmass in five Spratly island outposts. Some 75 percent of this been dredged this year alone.

Unnamed Indian officials have told local media outlets that they are “concerned” that China now plans to do the same in some of the Maldives’ 1,200 islands, which are located strategically in the Indian Ocean.

They are not alone; domestic opponents of the amendment have expressed similar concerns. For example, Eva Abdullah, one of just 14 parliamentarians to vote against the amendment, told The Diplomat “this will make the country a Chinese colony.”

She elaborated by saying, “what I fear is that we are paving the way for the establishment of Chinese bases in the Maldives and making the country a frontline state between India and China, thereby disturbing the current balance of power in the Indian Ocean. We cannot ignore the increasing rivalry between India and China.”

Maldivian and Chinese officials have sought to temper such fears, however. In a statement given to Reuters, China’s Foreign Ministry said that Beijing “has always respected and supported the Maldives' efforts to maintain its sovereignty, independence and territorial integrity.”

The statement added that “what the relevant people said about China building bases in the Maldives is totally baseless.” China has claimed that it will never build oversea military bases.

Maldives President Abdulla Yameen has similarly dismissed fears that China will reclaim the islands and use them for military purposes. In a public address, Yameen said: “The Maldivian government has given assurances to the Indian government and our neighboring countries as well to keep the Indian Ocean a demilitarized zone.”

While the Indian government appears to have officially accepted Maldives’ assurances, others are more skeptical.

Anand Kumar, an analyst the New Delhi-based Institute for Defense Studies and Analyses (IDSA), noted “The constitution has been amended for the benefit of the Chinese. It is only China which has capacity to acquire 70 percent of the land.”

Others were alarmed at how fast the constitutional amendment was approved. Indian sources have noted to local media outlets that the legislative process in Maldives often takes weeks and months. By contrast, one Indian source tells the Indian Express that “the parliamentary panel reviewed and approved the Bill within just one hour… that raises alarm bells.”

Even before the new constitutional amendment was passed, India had been growing increasingly concerned with Maldives, a country that it considers to be in its sphere of influence. Earlier this year, Indian Prime Minister Narendra Modi cancelled a planned trip to Maldives after prominent members of the opposition, including former president Mohamed Nasheed, were jailed by the Yameen administration.

Similarly, even before the new amendment was proposed, Indian officials were alarmed by Maldives’ growing ties with China since President Yameen assumed power in November 2013. China has been investing heavily in Maldives in recent years as part of its Maritime Silk Road initiative.

Notably, Chinese President Xi Jinping made a state visit to Maldives last year, where he promised further investment, including in the Male International Airport. Chinese tourism to Maldives has also grown steadily in recent years, providing a hefty economic sum for the small nation.

China has also been trying to make inroads with other coastal South Asian nations like Sri Lanka as part of what many fear is Beijing’s “String of Pearls” strategy for the Indian Ocean.