Get Ready, China: Lethal A-10 Warthogs are Patrolling the South China Sea 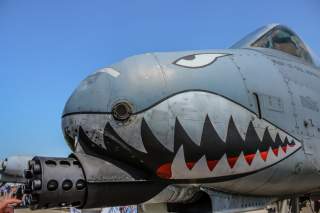 The U.S. Air Force’s venerable A-10 Warthog has been a lot of things. A Cold-War Soviet tank-killer. A slow-flying escort for rescue helicopters. A heavily-armed counter-insurgency plane. Even a specialized hunter of rotorcraft.

Now add “maritime patrol plane” to the twin-engine attacker’s resume. That’s because the Pentagon has sent four A-10s and their crews and maintainers to fly sea patrols west of The Philippines, in a mineral-rich region of the South China Seas that Manila and Beijing both claim.

The four Warthogs from the 51st Fighter Wing, home-based in South Korea, were actually part of a larger contingent of U.S. warplanes that visited The Philippines for the 2016 edition of the Balikatan war game. When the exercise ended on April 15, most of the Americans and their planes departed. But four A-10s and two HH-60G rescue copters remained behind at Clark Air Base.

Their mission — “air- and maritime-domain awareness, personnel recovery, combating piracy and [the] assurance [that] all nations have access to the regional air and maritime domains in accordance with international law,” according to the U.S. Defense Department.

And on April 19, the six-aircraft “Air Contingent” flew its first patrols over the South China Sea west of Luzon, The Philippines’ largest and most densely-populated island. In mid-April, the U.S. Navy aircraft carrier USS John C. Stennis had sailed through the same waters as part of a so-called “freedom-of-navigation” patrol that the Pentagon meant to assert America’s — and other countries’ — legal right to sail in international waters.

U.S. Secretary Ashton Carter and Philippine defense secretary Voltaire Gazmin flew to Stennis together on April 15. Carter took the opportunity to announced joint U.S.-Philippine patrols, of which the A-10s’ April 19 flights were presumably just the beginning.

Beijing officially condemned the planned patrols, insisting they reflected a “Cold War mentality.” China has dredged several coral reefs in the China Seas, piling sand atop them to create artificial island air bases and ports — and, in the process, killing the delicate reef creatures.

The U.S. Air Force possesses around 300 of the low- and slow-flying, heavily-armored, 1980s-vintage A-10s but has been trying to retire them in recent years in order to free up money for a handful of F-35 stealth fighters. Congress has consistently blocked the retirements.

Warthogs based in Turkey conduct air strikes against Islamic State militants in Iraq and Syria. A-10s also frequently visit Eastern Europe in order to deter Russian aggression. Warthogs have seen combat in the Middle East, North Africa and Afghanistan — but usually over land.

But in 2011, A-10s strafed and sank enemy boats during NATO’s intervention in Libya. The Philippines sea patrols represent a rare maritime mission for the ungainly jets.

And it’s also possible the A-10s’ Luzon deployment is part of a sale pitch. Boeing, which maintains the Warthogs, wants to sell any A-10s that the Air Force prematurely retires. And coincidentally, or not, Philippine airmen have expressed interest in acquiring them.