Get Ready, China and North Korea: F-35s Are Now Patrolling the Pacific 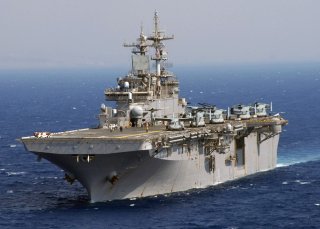 U.S. military newspaper Stars and Stripes reports that the USS Wasp and its strike group steamed away from Okinawa on Monday, heading out for its first patrol in the Indo-Pacific region since its homeporting in Japan earlier this year.

The multi-ship strike group has been sailing near Okinawa after leaving its base in Sasebo, Japan earlier this month.

The Wasp is an amphibious assault ship designed as a small aircraft carrier. It recently received a group of F-35Bs in the first official deployment of the advanced stealth fighter aboard a US Navy ship. The F-35B is the vertical takeoff, maritime version of the F-35.

The Wasp recently completed a “ready-for-sea assessment” operation during which F-35B Lightning IIs landed aboard the vessel for the first time.

“During the patrol, sailors and Marines – who are trained to conduct amphibious assaults, seize airfields, reinforce embassies, evacuate civilians and respond to disasters – will learn to work together,” according to a US Navy statement.