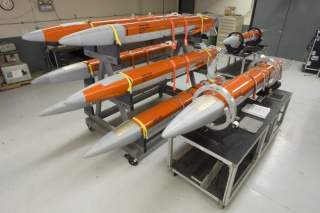 America’s greatest potential military competitors—namely Russia and China—are developing game changing capabilities to deny U.S. forces the ability to enter into contested military theaters. Moscow and Beijing are also spending billions of dollars to modernize and upgrade their armed forces, while at the same time Washington underfunds, undertrains and underappreciates the threats of the future. While there are many possible solutions to this growing great power challenge, one seems almost too incredible to imagine, seemingly pulled from the pages of your favorite comic book to be real. This potential solution: drone swarms.

OK, stick with me here for a moment—and no, I haven’t been watching too many Terminator movies. U.S. Secretary of Defense Ashton Carter, speaking recently at the Economic Club of Washington, previewed the idea. A special endeavor is being championed by the recently created Pentagon Strategic Capabilities Office: small, swarming drones that are being built mostly from parts created by 3D printers. Carter noted that "they've developed micro-drones that are really fast, and really resilient." Carter added that the machines “can fly through heavy winds and be kicked out the back of a fighter jet moving at Mach 0.9. . . or they can be thrown into the air by a soldier in the middle of the Iraqi desert."

Seen a version of this idea before, loyal National Interest readers? Paul Scharre, Senior Fellow and Director of the 20YY Future of Warfare Initiative at the Center for a New American Security has been working on this concept for a while now and has written one of the most comprehensive essays on the topic in these very pages back in 2014.

Scharre, who worked in the Office of the Secretary of Defense and played a key role in crafting policies on unmanned and autonomous systems, not only gets the problems:

“The U.S. military is at a crisis point. We are staring down the barrel of a future where U.S. military technological superiority may no longer be a given where the military strength that has undergirded global security since World War II may be in question. The technologies that have given the U.S. military its edge stealth, long-range sensors, communications networks and precision-guided weapons are proliferating to other actors. As a result, so-called “anti-access” challenges threaten traditional modes of power projection. While individual U.S. ships, planes and tanks remain more capable one-on-one, the pernicious “death spiral” of rising costs and shrinking procurement quantities means that the United States has increasingly fewer and fewer assets to bring to the fight. The U.S. military will have to fight significantly outnumbered, and even the qualitative advantages U.S. assets have will not be sufficient. Quality matters, but numbers matter too. At a certain point, U.S. aircraft and ships will simply run out of missiles.”

But he sees a big-think solution:

“Swarms of low-cost robotic systems can overwhelm enemies, saturating their defenses. Cooperatively, they can operate with greater coordination, intelligence and speed on the battlefield than manned systems.”

“Perhaps most significantly, they can help to bend the cost curve downward [think about expensive systems like the F-35, for example], allowing the United States to field large quantities of systems that, in aggregate, retain qualitative superiority. Disaggregating complex, multimission systems into larger numbers of lower-cost systems is a potential way to increase resiliency, diversity and impose costs on adversaries—and to do so affordably. But harnessing the advantages of this approach will require a new paradigm for how we build next-generation military systems.”

If crafted in the way Scharre lays out, Russia and China would surely have something to worry about:

“As the United States begins to grapple with possible responses to the anti-access challenge, a ‘flood the zone’ approach should be an option in the U.S. toolkit. Large numbers of low-cost, uninhabited and autonomous systems can overwhelm enemy defenses and act as decoys, scouts and “missile trucks” for human-inhabited systems. Because of their greater persistence, uninhabited systems could be seeded into the battlespace weeks or months ahead of time where they lurk unseen, allowing an early toehold in gaining access.”

Scharre, to his credit, does list some of the potential challenges—like some military positions becoming obsolete—but clearly the benefits outweigh the downsides:

“Swarms of uninhabited and autonomous systems will open up new ways of fighting, and new doctrine, training and organization will be needed. Uninhabited and autonomous systems need not replace every function of a human or human-inhabited system in order to be useful. Rather, they can help warfighters perform their missions better by absorbing some tasks, so that warfighters can focus on what only humans can do. In some cases, this may mean some military jobs are eliminated or changed beyond recognition, just like we no longer field archers today, and infantrymen, sailors and cavalrymen all look very different from their counterparts of old who shared the same names. While this may generate some discomfort, there is an imperative to moving quickly. Much of the innovation in robotics comes from the commercial sector, and will be widely available. If the U.S. military is to maintain its technological edge, it will need to harness the advantages of the robotics revolution and build the swarm.”

Revolutionary weapons that can change how the United States fight wars are a tough thing to recognize and seem to be proclaimed just about every day. However, I am willing to bet, if done right and given the proper resources to succeed, swarm weapons could be a game changer for the U.S. military. What good are anti-access strategies when you can simply overwhelm your enemy—and potentially on the cheap? Russia and China should be worried, very worried indeed. Can you say Air-Sea-Swarm Battle? I can.