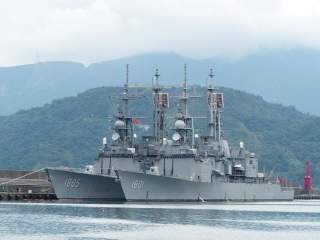 Taiwan lives every day with the threat posed by the increasingly capable armed forces of the People's Republic of China (PRC). The Taiwanese Navy in particular has to consider both the prospect of a direct attack on the main island and the potential interdiction of its shipping, a critical problem for a country absolutely dependent on imported energy and resources.

This creates a constant tension between capabilities, which would prevent or delay an amphibious assault and those required for longer-range sea-control operations. There is, for example, a lively debate on the priority that should be given to mine warfare ahead of more expensive precision-guided weapons and targeting systems, and larger ships

Circumstances are pushing the Taiwanese Navy to a much greater level of autonomous capability development than it would want. Taiwan has long built its own surface combatants, but the difficulty of getting access to high capability designs is forcing it to be even more ambitious. While previous classes have been constructed to American or European designs, it now plans to build indigenous units, with a class of four 8000+ ton guided missile destroyers the centerpiece of the program, supplemented by high speed missile carrying attack catamarans, the first of which is in service.

This is not the limit of the Navy's ambitions. Replacement and expansion of the submarine force has probably the highest priority.

Taiwan would happily purchase submarines overseas but China's increasing global influence and economic weight have ensured that no submarine-building country has been willing to enter into an agreement with Taiwan, even for licensed manufacture. The only other potential provider, the U.S., has domestic restrictions on the building of non-nuclear submarines. Consequently, after much internal debate and several aborted projects, Taiwan has decided to go it alone, at least with the design and manufacture of submarine hulls and major systems.

The Navy believes that Taiwan's high quality steel manufacturing and its commercial expertise with high pressure cylinders, underwater equipment and propulsion machinery give it the basis for the production of small submarines in the range of 1400 to 1800 tons. Eight are planned. The Taiwanese Navy is not entirely in the wilderness in relation to some of the associated elements of submarine technology and is likely to seek US support for weaponry and for sensors and systems such as optronic masts. It already has Sub-Harpoon missiles; deliveries of the first of 32 began in 2013 and should be complete by 2016.

In the meantime, the two ageing Dutch-built submarines will be refitted further. The Taiwanese Navy expects that experience with renewal of elements of their pressure hulls will help the development of expertise for the new units. Contrary to some reports, the pair of very elderly ex-US Navy Guppy boats will not be refitted. They are simply too old, at 70+ years (and, arguably, too primitive).

There is another element to Taiwanese naval planning than the defense of the island and its sea lines of communication.

Taiwan seeks every opportunity to demonstrate its presence internationally, something the People's Republic of China works hard to restrict. Taiwan would very much like to participate in international maritime security and anti-piracy operations, but China's influence is too powerful for this to be possible. However, it has not escaped Taiwan that seaborne humanitarian assistance and disaster relief (HADR) capabilities not only have domestic utility – particularly in a country prone to typhoons – but are a potential mechanism to remind others of Taiwan's existence.

A first step on this direction has been taken with the new 20,000 ton replenishment ship Panshih. The ship has extensive medical facilities including a four-ward hospital, as well as substantial fuel and dry cargo capacity, a helicopter hangar and flight deck. The Taiwanese Navy may well invest in a second unit, but it also plans to build at least one 11,000 ton landing platform dock. While this will replace some very elderly ex-US Navy amphibious units, such a ship also has obvious utility for HADR and for long-range peace missions. The Navy has even begun feasibility studies for a 30,000 ton landing helicopter dock (LHD) similar in size to the Spanish Juan Carlos and Australian Canberra.

Whether Taiwan has the design resources, let alone the funding, to manage every line of development that its Navy is considering is moot. Nevertheless, it is clear that Taiwan's defense planners are doing what they can to fulfill the intent of Taiwan's 2013 Quadrennial Defense Review to “gain multi-functional capabilities, and engage in close regional cooperation so as to maintain peace in the Taiwan Strait, ensure national security, become a "peacemaker" in the international community, and contribute to peace and stability of the Asia-Pacific region.”