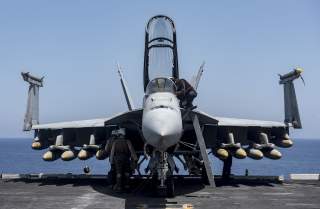 In a move that is sure to upset China, a U.S. aircraft carrier will be visiting Vietnam in 2018, the first time an American carrier will be in the country since the end of the Vietnam War.

Last week, Vietnam's Defense Minister Ngo Xuan Lich visited the United States to meet with Secretary of Defense James Mattis. The readout of the meeting said the two defense leaders “directed their staffs to work toward arranging a first carrier visit to Vietnam once technical conditions permit.” The Pentagon later clarified that the goal was to arrange a visit some time next year.

The carrier visit is the latest sign that the two countries are rapidly strengthening ties in response to China’s rise, despite the deeply ingrained suspicions from the war they fought in the 1960s and 1970s. After that conflict, the United States and Vietnam did not restore diplomatic relations until 1995.This was followed up by presidential visits to the communist country by Bill Clinton in 2000 and his successor, George W. Bush, in 2006.

Bilateral ties have really taken off since the Obama administration initiated the Asia Pivot at the end of 2011. In July 2013, President Obama and his Vietnamese counterpart, Truong Tan Sang announced they were forming a Comprehensive Partnership. The following year, Washington loosened the arms embargo against Vietnam, before fully lifting it two years later. Shortly thereafter, in October 2016, two U.S. warships, the submarine tender USS Frank Cable and guided-missile destroyer USS John S. McCain, docked in Cam Ranh Bay. This was the first time a U.S. warship has docked in Cam Ranh Bay since the war, although other noncombatant ships had visited the base in the past. The USS John S. McCain, which is forward deployed in Japan, had also visited other ports in Vietnam before that, and made another pitstop in Cam Ranh Bay in June of this year.

U.S.-Vietnam relations got off to a rocky start under the Trump administration, when—as one of his first moves after taking office—President Donald Trump pulled out of the multilateral trade agreement, the Trans-Pacific Partnership. Since then, however, bilateral relations have continued the steady improvement they enjoyed during the Obama administration. In May, Vietnamese Prime Minister Nguyen Xuan Phuc met with President Trump at the White House, and Trump plans to visit Vietnam for the Asia-Pacific Economic Cooperation Summit (APEC) in November. The United States also gave Vietnam’s Coast Guard a Hamilton-class cutter in May. The next month, an Independence-class littoral combat ship (LCS) received maintenance at Cam Ranh Bay. And, last month, the two countries conducted their eighth annual Naval Engagement Activity (NEA).

While neither side would admit it, the impetus for strengthening bilateral ties is China’s growing military capabilities and assertiveness, especially in the South China Sea. The importance of their relationship has grown recently. Since taking office in 2016, Philippine President Rodrigo Duterte has tried to repair ties with China, leaving Vietnam more isolated among Southeast Asian nations in resisting Beijing’s actions in the South China Sea. As Gregory B. Poling, the director of the Center for Strategic and International Studies' Asia Maritime Transparency Initiative noted on CNN this week, “When it comes to the disputed waters of the South China Sea, Vietnam's leaders must feel very lonely these days.”

Hanoi has also found itself increasingly in China’s crosshairs this year. In June, Vietnam gave a local subsidiary of the Spanish firm Repsol permission to drill for oil and gas in Vanguard Bank, an area in Vietnam's Exclusive Economic Zone (EEZ) that Beijing also claims. China immediately protested the move through diplomatic channels. When the drilling continued, according to Bill Hayton, China’s Foreign Ministry summoned the Vietnamese ambassador and threatened to use military force unless Vietnam cancelled the drilling and promised never to resume it in that part of the sea again. Despite dissent among the top leadership, Vietnam reluctantly acquiesced to China’s demands, reportedly in part because Hanoi did not believe the Trump administration could be relied upon to come to its aid.

That was not the only spat between China and Vietnam this year. Just this month, China’s Foreign Minister Wang Yi cancelled a bilateral meeting with his Vietnamese counterpart because Hanoi championed that language about the South China Sea be included in a communique issued by the foreign ministers of the Association of Southeast Asian Nations (ASEAN).

The reality is that Duterte’s pivot to China, combined with Thailand’s flirtation with Beijing since the 2014 coup, also makes the United States more reliant on Vietnam in dealing with the South China Sea. Symbolic gestures like the aircraft carrier are a start, but nowhere near enough in dealing with Beijing.