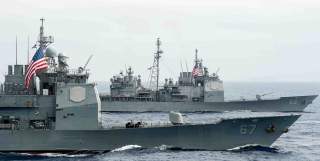 The missile draws upon new software, computer processing and active-seeker technology to send an electromagnetic ping forward from the weapon itself as a method of attacking moving targets.

The missile, which has been in development by Raytheon for several years, draws upon new software, computer processing and active-seeker technology, which sends an electromagnetic ping forward from the weapon itself as a method of tracking and attacking moving targets. The electronic signals bounce off a target, and then the return signal is analyzed to determine the shape, size, speed and contours of the enemy target. This technology allows for additional high-speed guidance and targeting.

“The seeker suite will enable the weapon to be able to engage moving targets in a heavily defended area,” Navy spokeswoman Lt. Kara Yingling told Scout Warrior.  “The Maritime Strike Tomahawk enables the surface fleet to seek out and destroy moving enemy platforms at sea or on land beyond their ability to strike us, while retaining the capability to conduct long range strikes,” she said.

The active seeker technology is designed to complement the Tomahawk’s synthetic guidance mode, which uses a high-throughput radio signal to update the missile in flight, giving it new target information as a maritime or land target moves, Raytheon’s Tomahawk Program Manager Chris Sprinkle said in an interview with Scout Warrior.

The idea is to engineer several modes wherein the Tomahawk can be retargeted in flight to destroy moving targets in the event of unforeseen contingencies. This might include a scenario where satellite signals or GPS technology is compromised by an enemy attack. In such a case, the missile will still need to have the targeting and navigational technology to reach a moving target, Sprinkle added.

An active seeker will function alongside existing Tomahawk targeting and navigation technologies such as infrared guidance, radio frequency targeting and GPS systems.

“There is tremendous value to operational commanders to add layered offensive capability to the surface force.  Whether acting independently, as part of a surface action group, or integrated into a carrier strike group or expeditionary strike group, our surface combatants will markedly upgrade our Navy's offensive punching power,” Yingling said.

Rapid deployment of the maritime Tomahawk is part of an ongoing Navy initiative to increase capability and capacity in surface combatants by loading every vertical launch system cell with multimission-capable weapons, Yingling explained.

The Navy is currently wrapping up the procurement cycle for the Block IV Tactical Tomahawk missile.  In 2019, the service will conduct a recertification and modernization program for the missiles reaching the end of their initial 15-year service period, which will upgrade or replace those internal components required to return them to the fleet for the second 15 years of their 30-year planned service life, Yingling said.