Get Ready, China: Is a U.S.-Vietnam Alliance Possible? 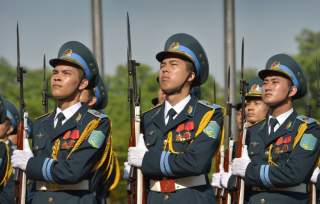 The U.S. and Vietnam have just signed a Joint Vision Statement, but don't expect them to join forces against China. An alliance is ultimately straw-man talk, but provides a useful way to look at the U.S.-Vietnam-China triangle.

Last weekend's Shangri-La Dialogue in Singapore had one main focus: the South China Sea and China's movements in it. As the U.S. has become more concerned and China has acted in ways that worry not just its neighbors and co-claimants of the Spratly and Paracel Islands, the issue has moved to the front pages of world's newspapers, and added urgency to the growing friendship between Washington and Hanoi.

The question of what sort of relationship may develop between the U.S. and Vietnam is also of growing interest because it's a compelling story about 'former foes' (the phrase is practically mandatory when talking about Vietnam and the U.S.) drawing closer.

I'm a little bemused, because I've been watching this story play out in one way or another since 2006 when I arrived in Hanoi, just before APEC and a few months before Vietnam joined the WTO as member 150. Growing ties with the U.S. and, later, territorial disputes with China, were the bread and butter of any journalist there. Whether internet cables were cut or fishermen threatened, it often meant that a small and committed group of protesters would march around the Hoan Kiem Lake on a Sunday morning in the city center, watched by police. It also meant that I, as a freelance correspondent, would be able to pay my rent.

Newspapers ran the stories on their foreign pages but they centered more on the protests and contretemps between Beijing and Hanoi than on any wider understanding of what the South China Sea meant or how it was going to change the region. Now, as China builds islands and airstrips, everyone is interested.

Another central feature of reporting from Vietnam in that period was the question of ties with the U.S. Even John McCain's presidential bid got coverage from the Vietnamese angle, with one of his former jailers saying he'd vote for the man. I ran with a story on nightclubbing kids who drank B-52 cocktails, and how it was all a sign of Vietnam's 'booming' economy (we loved that superlative), helped in large part by its 2001 trade agreement with the U.S., which McCain helped to push.

At the same time, the U.S. was always concerned with human rights, framed most often in terms of freedom of speech. This has remained a roadblock to growing ties (though if the will were there, Vietnam could release a few more dissidents as bargaining chips, and both nations could pretend to be happy, with China left unhappy) and the reason for the arms embargo on Vietnam, which John McCain would like to see lifted. Some 'non-lethals' are already for sale.

Since last year, when China moved an oil rig into Vietnam's EEZ and set off riots outside (Taiwanese) factories that killed people, speculation has grown: might an alliance between the two 'former foes' be useful, or even possible?

Defense Secretary Ashton Carter was in Hanoi days ago to sign the Joint Vision Statement on Defense Relations, which the U.S. and Vietnam hope will support expansion of military ties, particularly navigation of complex U.S. procurement rules. The statement is non-binding and outside of it being with a former enemy and nation at loggerheads with China, not particularly exciting.

But it is symbolic. Secretary Carter told a press conference that he and his counterpart Phung Quang Thanh, the Defense Minister, had discussed halting reclamation and militarization in the disputed South China Sea. Carter pledged US$18 million to help Vietnam buy some U.S. patrol boats and is also going to set up a site to train Vietnamese troops for UN peacekeeping mission. Senator John McCain wants a more robust strategy and said during his visit to Ho Chi Minh City, “We are not going to have a conflict with China but we can take certain measures which will be a disincentive to China to continue these kinds of activities”.

Communist Party General Secretary Nguyen Phu Trong is to visit the White House later this year (at Washington's invitation, though it was lobbied for by Hanoi). He visited his counterpart in Beijing in April.

Vietnam has been busy pursuing friendship with plenty of other nations too, including India, Russia, and even Australia. There is also a new Strategic Partnership with the Philippines. Hanoi continues to work within ASEAN too, despite the organization still being a bit toothless when it comes to South China Sea problems.

While China's actions are driving the two countries closer, the possibility of a U.S. alliance troubles hardline members of the Party and Politburo, thanks to worries about it being a quiet way for the U.S. to push harder for greater transparency and democracy. But to really understand the limits to U.S.-Vietnam cooperation, consider this: many in Australia agree that Australia cannot hope to stay militarily close to the US and trade well with China. Given that China is also Vietnam's largest trading partner, and that the nations share a border, hold security dialogues, and are tied through communist party links, an alliance would be a hard thing for Vietnam to manage (even ignoring its formal policy of non-alignment).

Every nation is engaged in its own hedging game between the two great powers. There are limits to how close Hanoi can move to Washington, but such moves do rattle Beijing, and may provide greater breathing room in the South China Sea, which is what this is about in the first place.