Get Ready, Iran: This Is Israel's Master Plan to Upgrade Its Military 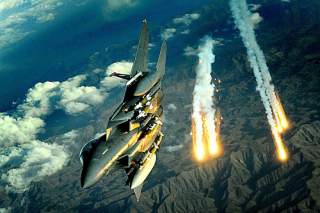 Israel is asking the United States for a squadron of advanced F-15 Strike Eagles and V-22 Osprey tilt-rotors as part of a “compensation package” for lifting American sanctions on Iran. The package would be worth more than $3.1 billion according to reports.

According to Flight International’s Arie Egozi, the Israelis didn’t just ask for ordinary F-15s. Instead, the Middle Eastern nation is asking for Boeing’s privately funded F-15SE Silent Eagle derivative which includes a number of radar cross section (RCS) reduction features and internal weapons bays housed inside the jet’s conformal fuel tanks. In previous years, Boeing officials would claim that the F-15SE had a frontal RCS that is equivalent to an export configuration Lockheed Martin F-35 Joint Strike Fighter. However, other defense and industry sources dismissed such assertions.

Israel wants to incorporate its own systems into the F-15SE version that it would buy. Those would most likely include the aircraft’s electronic warfare systems, helmet mounted cueing systems and communications suite among other items. It would probably also incorporate a host of Israeli-made weapons such as the Python-5 missile. However—if the United States holds to past practices—the aircraft will likely retain a U.S.-made radar—either the Raytheon APG-63 (v)3 or APG-82 (v)1 active electronically scanned array radars.

However, while Israel might want the F-15SE, that version of the Eagle is largely a paper plane. The new variant would have to be developed from the F-15SA, which was developed for Saudi Arabia. That version of the Eagle incorporated a host of advances including a new digital fly-by-wire control system and a completely new glass cockpit with large format displays, both of which will be crucial to the Israeli project. Thus, ironically, Saudi Arabia will be partly subsidizing the Israeli purchase. Unless Israel is paying to complete the rest of the developmental cost for the F-15SE, the American taxpayer will be on the hook for the remainder of the bill.

That’s not without precedent when it comes to Israel—the United States is subsidizing its purchase of the F-35 stealth fighter. Tel Aviv is paying for its first batch of nineteen F-35s entirely out of the military aid that the United States provides it with. The country has thus far ordered thirty-three F-35s while securing a special deal to integrate domestic components onto those jets—a consideration that hasn’t been offered to any other nation participating in the program. It also has the option of buying seventeen more jets under the contract. Ultimately, Israel might buy as many as seventy-five F-35s.

But instead of buying additional F-35s, Israel is opting to boost its fleet of F-15s. Part of the reason for that might be because Tel Aviv has concerns about the F-35’s performance. In 2014, Israeli strategic affairs minister Yuval Steinitz cited misgivings about the F-35's range, payload and maneuverability, which might not meet Tel Aviv’s needs. But the fifth-generation jet’s astronomical price tag was also a deterrent because even with more than $3 billion in annual U.S. military aid, Israel is struggling to pay for the stealthy new jets.

Thus, the Israeli request for a new and developmental version of the F-15 might be an indication of just how deep those misgivings run. The Silent Eagle is not much cheaper than the F-35 since its costs roughly $100 million per plane or more. Further, there are developmental costs to consider, which add to the price tag. Therefore, Israel must be concerned about the stealthy fifth-generation jet’s performance.