Get Ready, Islamic State: The F-35 Is Ready for Battle in Syria (Or Not) 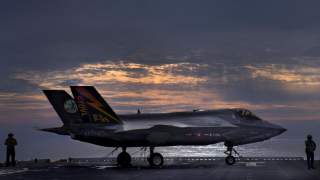 The United States has deployed some of its most advanced warplanes to fight over Syria and Iraq. But where are the U.S. Marine Corps’ newly operational F-35B Lightning II stealth fighters?

Despite having been declared operational at the end of July by Marine Corps. commandant Gen. Joseph Dunford, the stealthy jump-jet is nowhere to be seen in the theatre.

Last year, despite no air threat or even significant air defense systems to contend with, the U.S. Air Force deployed its prized Lockheed Martin F-22 Raptors into the fray. It was the first time those stealthy air superiority fighters had been sent into battle since the jet became operational in 2005. The Raptors—which have excellent sensors—have proven to be useful over Syria even without advanced threats to defeat, Air Force officials including Air Combat Command commander Gen. Hawk Carlisle have stated repeatedly.

Recently, as the Obama Administration announced that the United States will step up its campaign by deploying several dozen special operations forces into Syria, the Air Force also deployed a dozen A-10 Warthogs and some number of Boeing F-15C Eagle air superiority fighters to Turkey. But America’s newest “operational” strike fighter is nowhere to be seen.

But why is the F-35B absent? Wouldn’t the F-35 with its vaunted array of sensors—which purportedly put even the Raptor’s systems to shame—be as useful over Syria as the F-22?

The answer lies in the fact that despite Marines’ proclamations declaring the $400 billion F-35 operational, the jet is not genuinely ready for war.

A memo—which the Project on Government Oversight obtained in September—from the Pentagon’s Director of Operational Test and Evaluation (DOT&E) clearly shows that the F-35B had serious reliability issues before Dunford declared initial operational capability (IOC) on July 31. It also highlights the fact that the aircraft were not tested under realistic conditions during the F-35B’s “Operational Test One” demonstration. The seven F-35Bs onboard Wasp were “not cleared to carry or employ any ordnance.” Nor were the jets deployed with the rest of USS Wasp’s Air Combat Element (ACE) present.

“Even though Marine maintainers had rapid, ready access to spare parts from shore and the benefit of the expertise of embarked contractor personnel, aircraft reliability was poor enough that it was difficult for the Marines to keep more than two to three of the six embarked jets in an flyable status on any given day,” reads the DOT&E memo. “The challenges will be substantially tougher when the aircraft first deploys operationally, where working mission systems will not be optional, and where maintenance is likely to be more challenging due to the presence of the rest of the ACE.”

Nonetheless, the Marines continue to insist that the F-35B is ready to deploy into a war zone at anytime—which is the definition of being operational. “VMFA-121 has ten aircraft in the Block 2B configuration with the requisite performance envelope and weapons clearances, to include the training, sustainment capabilities, and infrastructure to deploy to an austere site or a ship. It is capable of conducting Close Air Support, Offensive and Defensive Counter Air, Air Interdiction, Assault Support Escort and Armed Reconnaissance as part of a Marine Air Ground Task Force, or in support of the Joint Force,” Dunford had said.

If the F-35B is indeed operational and ready for war—should it not be out there on the front line supporting America’s efforts to roll back the Islamic State? Wouldn’t its superior sensors be even more of a boon to U.S. forces in the region than the F-22’s?

Setting aside the sustainment costs—the American taxpayer is on the hook for nearly $400 billion just to buy the Pentagon’s 2,443 F-35s and we deserve a return on that investment. As former Defense Secretary Donald Rumsfeld famously said, "As you know, you go to war with the Army you have. They're not the Army you might want or wish to have at a later time.” It is time we deployed the F-35B we have. If the jet is ready for war as the Marines claim— then let’s see what it can do.