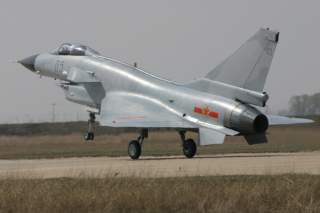 China is reportedly prepared to sell Iran some of its J-10 multi-role fighter jets.

Over the last week, a number of sources have reported that China and Iran are finalizing an agreement for Beijing to sell Tehran the Chengdu J-10, which China exports under the name the F-10. The aircraft is called the Vigorous Dragon in the West.

In addition, the Taiwan-based Want Daily reported this week that “China will provide the Iranian Air Force with a total number of 24 F-10 Vigorous Dragon jets, the export version of the J-10, to equip its two fighter groups.” The English-language version of that report did not specify the sources for the story. However, it did claim that Iran will pay for the fighter jets by making a sizeable oil concession to China. According to Want Daily, the cost of a single J-10 is around $40 million, placing the total cost of the deal around $1 billion.

The J-10 is often referred to as a 4.5-generation aircraft comparable to the F-16 Block 60 (flown by the United Arab Emirates), French Rafale, and Eurofighter Typhoon. The plane reportedly has its origin in the Lavi project that was jointly developed by Israel and the United States in the 1980s, before being abandoned. Numerous reports over the years have claimed that Israel sold China the blueprints for the Lavi plane against U.S. wishes.

The plane boasts an expansive range of nearly 3,000 kilometers, far longer than Iran’s current aircraft, according to Russian media outlets. The most advanced version of the J-10, the J-10B, is equipped with active electronically scanned array (AESA) radar, which—according to the Eastern Arsenal blog— “features a longer range, frequency hopping to foil enemy jamming and higher power to track stealth aircraft (such as the US B-2, F-22, and F-35) at long range.”

This is not the first time that Iran has been rumored to be interested in purchasing the J-10 from China. In 2007, for example, Russia state-owned media outlets reported that “representatives of the Iran Aircraft Manufacturing Industrial Company said China would deliver the total (24 jets) in 2008-2010. Experts, estimating one fighter at $40 million, put the contract's value at $1 billion.” Chinese officials later denied these reports.

China also inked a $1.4 billion agreement with Pakistan in 2009 to sell Islamabad 36 J-10s. This agreement was delayed after the International Monetary Fund imposed tough fiscal conditions on Pakistan in return for a loan.

The latest reports about Iran purchasing the J-10 should be taken with a grain of salt. DEBKAFile has a spotty record at best of breaking news on Iran. And while China has sold Iran weapons in the past, selling Tehran the J-10 would be far more substantial than previous deals. Furthermore, a senior Chinese defense industry official told state-owned media in late 2013 that “the export of a model of [the J-10] military aircraft has to be approved by the country first. However, [the] J-10 hasn't acquired the related export license so far."

That being said, with the arms embargo against Iran set to be lifted in the coming years, Tehran will be seeking foreign arms sales to upgrade its conventional military forces. The Gulf states and Israel both maintain huge qualitative advantages over Iran in the sky. Thus, upgrading the Iranian Air Force is likely to be a major priority of the Iranian Armed Forces in the years ahead.