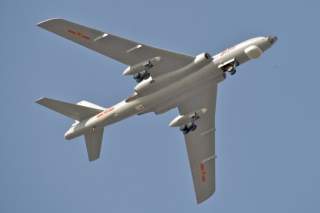 While the Chinese government offered few details, the exercise involved sending Xian H-6K bombers more than 600 miles beyond a line of islands which—depending on the definition— includes everything from the Kuril Islands in the north, the Japanese home islands, Ryukyu islands, Taiwan, the Philippines, to Borneo, down to the Malaysian Peninsula. In this particular case, the Chinese said that their aircraft were operating over the Miyako Strait just south of the Japanese island of Okinawa on Nov. 27, 2015, according to PLAAF spokesman Shen Jinke. In addition to the bombers, the PLAAF sent fighters and airborne early warning aircraft over the area. According to Shen Kinke, the PLAAF aircraft were patrolling China’s self-declared air defense identification zone (ADIZ) in the East China Sea.

The Chinese exercise is significant because it demonstrates that Beijing is serious about enforcing its ADIZ over the region. Moreover, the presence of the H-6K bombers together with their fighter escort—which appear to be variants of the Russian-built Su-30 Flanker—are a signal to the Pentagon and the Japanese Self-Defense Forces to maintain their distance.

The H-6K—which is a highly upgraded version of the antiquated 1950s-era Soviet-built Tupolev Tu-16 Badger—is the PLAAF’s mainstay bomber. But while the Badger is an antique, internally, the H-6K is a modern aircraft with a much-improved airframe, sensors and propulsion.

The new variant replaces the old Xian WP8 turbojets with new Russian Soloviev D-30-KP2 turbofans adapted from the Mikoyan MiG-31 Foxhound. The Russian engines combined with new composite materials used in the airframe have boosted the bomber’s range by some thirty percent—it now has a combat radius of roughly 2,200 miles. Avionics-wise, the H-6K dispenses with steam gauges and incorporates a full glass cockpit. The bomber also incorporates a new long-range surface search radar and an electro-optical targeting pod to find its prey.

Unlike previous iterations of the Badger, the H-6K was designed primarily as a cruise missile carrier. The jet can carry six KD-20 or YJ-12 long-range land attack and anti-ship cruise missiles on its wing and potentially several more inside its weapons bays. It is also thought to carry a host of precision-guided weapons. That makes it a threat to not only U.S. and allied shipping, but also land bases.

The H-6K is just one component of a family of Chinese anti-access systems including anti-ship ballistic missiles that China is developing to keep U.S. forces at bay. But while the H-6K is a decent cruise missile carrying platform similar in concept to how the U.S. Air Force uses its remaining B-52 bombers, it does not have anywhere near the capability of Russian aircraft like the Tupolev Tu-22M or Tu-160 Blackjack. Both of the Russian bombers were designed to attack U.S. Navy carrier battle groups during the Cold War using a strategy similar to what the Chinese are trying to implement.

As such, it is likely that the Chinese will eventually either develop a supersonic bomber similar to the Tu-22M especially as it pushes further out into the Pacific. The other alternative is that the PLAAF might develop a stealth bomber at some point. But in either case, China probably does not currently have the propulsion technology necessary to develop such an aircraft.