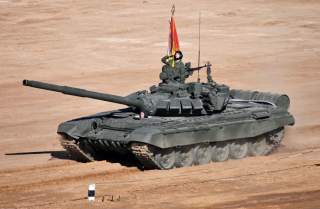 Moscow’s new T-14 Armata looks to be the most advanced main battle tank that Russia has ever produced. Indeed, many analysts share the view that the Armata might be more than a match for the best Western tank designs--which has prompted Germany to embark on a plan to upgrade the long-serving Leopard 2 with a new 130mm and begin work on a new tank.

However, while the Armata looks to be a formidable design, it is very expensive--and given the state of Russia’s economy--Moscow might not be able to afford to produce the tank in large numbers. “The high cost of the Armata tank is expected to limit procurement,” writes Dmitry Gorenburg, a scholar at Davis Center for Russian and Eurasian Studies, Harvard University. “According to unofficial sources, the cost per tank is approximately 400 million rubles, which is more than double that of the German Leopard-2 and about 60-75% higher than that of the French Leclerc and U.S. M-1 Abrams. Yuri Borisov, the deputy defense minister responsible for procurement, has indicated that the cost is about 2.5 times higher than stated in the State Armaments Programme.”

According to Rostec--a state corporation dedicated to facilitating Russian technology exports--the new tank is in production. Armata manufacturer Uralvagonzavod stated earlier that it could produce up to 40 tanks in 2016, 70 in 2017 and up to 120 per year from 2018 onwards. That means, Gorenburg writes, the absolute maximum number of Armata tanks that Russia could have in service by 2020 is about 330.

The alternative for Russia is to instead continue to buy additional new-build T-90AMs or some other advanced version of the T-90 series tank. Those vehicles are not as pricey as the Armata, but could cost more than $4.5 million per tank. Another alternative--one which Russia is pursuing to an extent--is to the expand the T-72B3M modernization program.

According to Uralvagonzavod deputy general director Alex Zharich, who spoke to the Russian-language daily Izvestia, Russia plans to spend 2.5 billion rubles to upgrade one hundred and fifty T-72Bs to the new B3M standard for an average of 17 million rubles per tank.  In U.S. dollar terms, that’s a total of $35 million for an average of $234,000 per tank—which means the T-72B3M upgrade is a relative bargain for the capability the vehicle is expected to deliver.

According to Izvestia, the upgraded tank will get a new 2A46M5 125-millimeter smoothbore gun along with a new sighting system called the Sosna-U, which will be paired with the 1A40-4 fire-control system. The tank will also receive a new ballistics computer to help increase its accuracy. Perhaps more significantly, the T-72B3M will receive an independent PK PAN sight for the tank commander, which has its own thermal imaging system.

The T-72B3M is also getting the new Relikt explosive reactive armor (ERA) package that was first introduced on the T-90AM. The Relikt replaces the older Kontakt-5 ERA package, and is allegedly twice as effective as the older system. The T-72B3M will also receive a new 1,130hp V-92S2F to replace its original 780hp diesel engine. The new engine is coupled with a new automatic transmission system and improved drivetrain, which should improve the T-72’s mobility. The driver will also receive a new rear-view camera display to improve his situational awareness.

The upgraded vehicles would offer performance comparable to the much more modern T-90, but for a fraction of the price. That might be a more economical plan than a brand new fleet of Armatas.