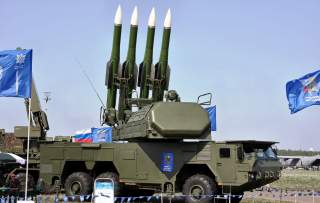 Russia will start research and development (R&D) work on a new generation of surface-to-air missiles for its army in 2018. The research work will be used to inform a full-scale development effort that will start in 2020.

The new prospective new family of weapons—which the Russians have code-named “Standard”—would replace all of the Russian Ground Forces air defense missiles including the Tor, Buk and some versions of the S-300. However, the prospective new system would not replace the Russian Aerospace Forces’ air defense weapons such as the S-400 and the forthcoming S-500.

“By 2020, the main focus of development will be the creation of a single universal multifunctional weapons system for the Army Air Defense troops,” Lt. Gen. Alexander Leonov, commander of the Russian Army Air Defense troops told the TASS news agency. “It will be necessary in 2020–2025 to lay the technological foundation for such a system by opening an innovative R&D division.”

When full-scale development starts in 2020, the Russians hope to develop a fully integrated and networked air defense system that would utilize a modular family of missiles, Leonov said. The missiles would come in short, medium and long-range variants. Moreover, the future system could potentially incorporate novel technologies such as lasers and other directed energy weapons, Leonov added.

The Standard is not a weapon system per se; rather it is the name for the entire overarching family of next generation Russian Ground Forces air defense systems.

“What he means is not any particular SAM system. They are going to start the development of the whole new family of weapons and equipment for the Ground Forces air defense units,” Russian defense analyst Vasily Kashin at Moscow’s Higher School of Economics (HSE) told The National Interest.

“That will include short and medium range SAMs and a net-centric command and control system which will command them and also some 'weapons on the new physical principles' which, as I understand, most likely means lasers. We are already actively developing some types of laser weapons.”

The Standard will be a comprehensive system that will include new versions of every element of the Russian Army’s air defense apparatus.

Kashin said that Moscow’s concept for its Army is different from Western ground forces. The Russian Ground Forces expect to be operating in an environment where the enemy controls the air. As such, Russian Army formations are accompanied by massive numbers of mobile air defenses.

“Since the Russian Army is built for war in situations of general Western air superiority, it has outsized air defense units,” Kashin said. “That was the case since Soviet times.”

As one Russian defense industry source explained, whatever system emerges from the Standard program would ultimately replace all of the Russian Ground Forces’ formidable array of air defense systems including the Pantsir, Tor, Buk and even the ultra-long range S-300V4.

The Standard would not replace the Russian Aerospace Forces air defense troops (PVO) weapons, however. The PVO is focusing its efforts on completing their transition to the formidable S-400 and the new S-500, which is nearing operational capability.

“The PVO troops, which are part of the Aerospace Force, are another story, “ Kashin said.

“They have their own programs which are centered around the heavy long range systems such as S-400, S-500, long range radars etc.”

If the Standard program ultimately comes to fruition, Russian Ground Forces armored columns will remain a tough nut to crack for Western air power. It remains to be seen if future Russian air defenses will be able to counter stealth aircraft such as the Lockheed Martin F-35, but Moscow is certainly working on technologies to defeat the advanced new jet. It’s really just a matter of time before the Russians find a countermeasure against fifth-generation fighters such as the F-35.