Get Ready, NATO: The Secret Reason Why Russia's New T-90M Tank Could Be a Total Monster 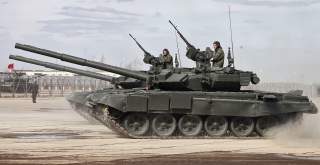 Russia is developing a new modernized version of the T-90—the third major iteration of the long-serving main battle tank.

Called the T-90M, the new tank will likely feature many of the technologies developed for Russia’s revolutionary T-14 Armata. However, compared to the T-14, the T-90M—most of which will be remanufactured from Russia’s existing fleet of T-90As—will be far less costly than the fearsome, but expensive, Armata.

“The new vehicle could be twice as effective as compared to its predecessors,” writes Dmitry Yurov, a defense reporter at Russia’s Tvzvezda channel. “This third ‘Breakthrough’ from Uralvagonzavod can test out many of the technological developed developed for the fourth generation of tanks. In the short term, this approach will not only improve the reliability and firepower of the tank, but also significantly increase the demand for such a machine on the world market.”

One of the main features of the T-90M will be a new version of the 125mm cannon—which was developed for the T-14—along with a new autoloader. “T-90M is a deep modernization of the T-90A. 400 T-90As, which are in service with the Russian Federation Armed Forces would fall under such a modernization plan,” Russian defense analyst Alexei Leonkov told Yurov. “The tank will receive an upgraded 125-mm smoothbore gun called the 2A82-1M—the same as that on the Armata—and a new fire control system, which is characterized by high levels of accuracy, rate of fire and has an increased barrel life—about 900 shots.”

Particularly, the addition of the Afghanit active protection system could be a potential game-changer. The Russians claim that the system is able destroy incoming kinetic energy rounds, something which Western experts are dubious about.

Michael Kofman, a research scientist specializing in Russian military affairs at the federally funded Center for Naval Analyses, told me last year that he was skeptical. “I don't see it as realistic,” Kofman said. “A discarding sabot is a depleted uranium dart, the entire concept is that the material is incredibly dense to serve as a penetrator. The Afghanit APS uses a fragmentation charge and is not liable to do much to the A4—the latest variant—of U.S. munitions.  I can see it possibly pushing the dart off course with some sort of hit-to-kill approach, but I doubt much can stop it—besides combinations of ERA [explosive reactive armor] and composite armor.”

But even if the Russians are exaggerating their claims about the Afghanit’s capabilities, the T-90M should be a formidable war-machine. “Embedded the T-90M design with components from the fourth generation of armored vehicles once again demonstrated the potential for modernization of domestic armor,” Yurkov writes.

In any case, this latest T-90M project once again demonstrates the versatility of the Soviet Union’s original T-72 design. Ultimately, under all of those improvements, the T-90M is still based on that original chassis. Quite an achievement.