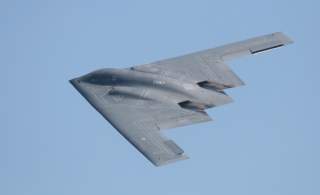 While the “the actual deployment timing is all classified”, America’s B-2 Spirit stealth bomber will soon be much closer to hot spots in the Asia-Pacific—and the timing could not be more perfect, considering recent troubles on the Korean Peninsula.

In an August 24 U.S. Department of Defense Press Briefing conducted by Secretary James and Gen. Welsh on the State of the Air Force, it was revealed that the U.S. military was “in the process right now deploying three B-2s on a scheduled rotation to Andersen Air Base in Guam.”

Welsh also noted that “we continue to have airmen stationed on the Korean peninsula who are there full time who are ready for whatever might happen, and they're ready every day.”

While tensions on the Korean peninsula have eased in the last twenty-four hours, thanks to an agreement between Seoul and Pyongyang, the deployment of America’s most advanced bomber should give North Korea some pause, in case it was considering any other escalatory actions in the future.

Why China Should Also Worry:

While the B-2 is certainly the cream of the crop when it comes to American long-range strike power, it would certainly not be able to win a war against Pyongyang by itself. However, anytime North Korea rattles the saber, it is likely to get American strategic planners thinking about deploying additional weapons platforms to the Asia-Pacific region—something China very much wants to avoid.

Indeed, if America viewed North Korea’s latest provocations as a serious long-term challenge, Washington must just start deploying weapons platforms that would act as a powerful deterrent, a deterrent that could also weaken China’s much discussed anti-access/area-denial (A2/AD) technologies and strategies.

As I noted in The Diplomat a few years ago during the last major North Korea crisis, Pyongyang might “just provide the strategic rationale the United States needs to drop the veiled nature of the military and geostrategic components of its pivot to Asia” and begin a much bigger deployment of advanced weapons systems and defensive platforms along with a change in stance by U.S. allies. At the time, I explained that:

“American military planners may decide to keep ever increasing amounts of ballistic missile defense systems forward deployed in East Asia for the next time North Korea threatens the region.

All of this has ramifications for Beijing. Ever increasing amounts of missile defense systems will certainly erode China’s growing anti-access capabilities. While it is hard to make solid predictions, it is clear that missile defenses utilized for the protection of U.S. bases and allies in the region also have the potential of being used and/or enhanced to defend against Chinese missiles in the event – however remote – of some sort of conflict. While no one knows for certain how effective China’s new capabilities would be in a crisis, nor how effectively American and allied missile defenses would prove against such missiles, there is certainly the potential that the potency of China’s asymmetric capabilities would be degraded.”

So how would China respond?

“It’s unclear how Chinese military planners would seek to regain the advantage—maybe by increasing the amount of missiles they have in their arsenal or by building new, more-advanced systems. What is clear is that North Korea’s threats and bluster will have a long-term impact on East Asia’s military balance for years to come, and it’s unlikely to be to the advantage of North Korea’s longtime ally in Beijing.”

So, Beijing, it might be time to have a chat with your allies in North Korea. Their actions could come back to haunt you.