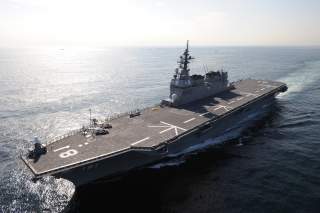 Some of the most remarkable vessels sailing today in any navy are Japanese. After more than six decades, Japan can once again count large ships with full-length flight decks and roomy, bow-to-stern aircraft carriers as part of its navy. Except don’t call it a navy—and whatever you do, don’t call them aircraft carriers.

Japan has three “helicopter destroyers”: Hyuga, its sister ship Ise and the larger Izumo. Each strongly resembles an aircraft carrier, but due to political and engineering concerns are technically not—nor ever will be. All that being said, Japan is on a trajectory that could lead to actual carriers if the need arises.

In the aftermath of World War II, Japan renounced war as an instrument of the state. The government authorized the creation of the Self-Defense Forces, armed forces with a strictly defensive mission. The Maritime Self-Defense Force is a navy in all but name, with some important restrictions: as a matter of policy, the government forbids the construction of weapons considered primarily offensive in nature, particularly aircraft carriers.

Despite this, the MSDF has sought to return to naval aviation for decades. The MSDF’s core mission of protecting Japan’s sea lanes has made a carrier, even a ship similar to the Royal Navy’s Invincible-class light carriers desirable. Japanese naval planners have taken a very long strategy to achieve this goal.

In the late 1960s, the MSDF built two helicopter destroyers of the Haruna class. Haruna and its sister ship Hiei had fully half of the ship devoted to a helicopter flight deck and hangar. The primary mission of the ships was acting as a floating, mobile platform for antisubmarine warfare helicopters. These were followed by two similarly outfitted destroyers of the Shirane class.

The Haruna and Shirane classes weren’t aircraft carriers by any stretch of the imagination, but they were a “testing of the waters” for naval aviation. Both were in turn followed by the Osumi-class tank landing ships. At fourteen thousand tons fully loaded, the Osumi ships were meant to ferry ground forces between Japan’s islands. Curiously, they also featured a full-length flight deck—even though they lacked hangars to store and service aircraft and bore the strongest resemblance to date to actual aircraft carriers.

In 2009, Japan took another ponderous step towards naval aviation with the launching of JS Hyuga. Hyuga and its sister ship Ise are 676 feet long and weigh 19,500 tons fully loaded, making them even bigger than HMS Invincible. Both carry four antisubmarine warfare helicopters, and can support up to eleven. In 2013 an even large helicopter carrier, JS Izumo, was launched. 816 feet long and twenty-seven thousand tons fully loaded, Izumo and its sister ship under construction, Kaga, normally embark nine helicopters and can carry up to fourteen. Each is the centerpiece of an escort flotilla of destroyers and destroyer escorts, designed to protect ship convoys from submarine attack.

All four ships have full-length flight decks, aircraft elevators, islands to oversea aerial operations and large, voluminous hangars. Still, unlike conventional aircraft carriers, the Hyuga and Izumo classes are unable to operate fixed-wing aircraft. Although they theoretically have the room for the F-35B V/STOL variant of the Joint Strike Fighter, ship design decisions preclude their accommodation. There is no ski ramp for assisted takeoffs, and installing one would require extensive modifications in dry dock, taking brand-new ships out of commission for a year or more. While each ship has two aircraft elevators, only one per ship is of sufficient size to accommodate larger aircraft such as the F-35B and the MV-22 Osprey.

Both classes have facilities to store munitions and aviation fuel, but these would need to be greatly expanded to accommodate even a small number of fixed-wing fighters. This would cut into the hangar spaces, leaving less room for aircraft. In sum, turning these ships into ad hoc carriers would be much too difficult, time-consuming and expensive.

But what of the future? Japan’s naval aviation ships are steadily growing larger and more capable—almost ridiculously so: at 27,500 tons and more than eight hundred feet long, Izumo is unnecessarily large for an all-helicopter ship. The intimation is Japan is building progressively larger ships to gain experience for eventually constructing a genuine, fixed-wing aircraft carrier.

If Japan were to build fixed-wing carriers, how would they be used? The most likely would be to provide additional air cover over the Ryukyu and Senkaku Islands, much of which is served by a single air base/civilian airport on the island of Okinawa. Still, unless a carrier (or two, or three) were able to put several dozen aircraft into the air simultaneously, the proximity of both island chains to China means the People’s Liberation Army Air Force and Army Naval Air Force could always overwhelm Japanese naval air assets with sheer numbers.

Finally, Japan simply cannot afford real carriers. Japan’s gross government debt is now twice the size of the entire economy. Pegged at roughly per 1 percent of GDP, Japan’s defense budget grows slowly, when it grows at all. Still, that assumes that no great security crisis makes aircraft carriers a necessity. If relations with China continue to worsen, Tokyo could always finance the construction of aircraft carriers with debt.