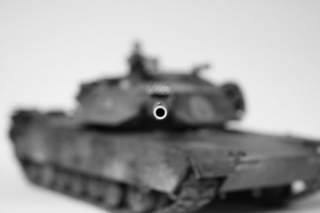 Few things highlight a nation’s military power better than a column of tanks. As the United States and Russia vie for influence in Europe, the Pentagon has come to see armored vehicles as an important, if often slow, show of force.

That’s why a team of M-1 Abrams main battle tanks made the long journey to the Republic of Georgia in early May 2016. They were the U.S. Army’s first tanks to ever visit Georgia, which fought a brief, violent war with Russia in 2008.

On May 4, rail cars loaded with 70-ton M-1s and M-2 Bradley armored fighting vehicles rolled off a ferry at the port in the Georgian city of Batumi. The occasion is a three-week war game organized by the Georgian military and U.S. European Command.

“This will be the first time that M-1A2 main battle tanks are transported into the country of Georgia,” Army captain Samuel Herbert — in charge of Company A, 1st Battalion, 64th Armor Regiment — told the service’s reporters. “This is significant for the Georgians because we can now work alongside the Georgian T-72 main battle tank.”

The M-1 dates to the 1970s, but the newest version of the tank boasts advanced computers to help its crew aim the 120-millimeter gun on the move plus powerful optics to cut through dust and see at night and the latest communications and navigation gear. Since at least 2006, the Army has been working to give the massive tanks new, deadlier ammunition and other improvements.

Georgian tankers still drive the significantly smaller and lighter — 45 tons — Soviet-era T-72, though some have been upgraded to the new SIM-1 configuration. Among other improvements, the SIM-1 package includes a Polish night-vision sight with a laser rangefinder plus new radios.

While Georgia is not a member of NATO, the alliance nevertheless works closely with the country’s troops. One stated goal of the current war game is to get a company of around 200 Georgian soldiers ready for its upcoming participation in the NATO Response Force, or NRF.

With a total of around 40,000 troops from inside and outside of NATO, this unit is on call to respond, in a matter of weeks, to crises anywhere in the world. Individual countries contribute troops to the NRF on 12-month rotations.

Georgian troops have been fighting alongside NATO in Afghanistan since 2004. More than a decade later, the alliance accepted the mountainous country’s offer to join the NRF.

In addition to helping train the Georgians for routine tasks, the Pentagon no doubt hopes its tanks will make impressions in Moscow and in the capitals of America’s European allies.

“It is now clear Russia does not share common security objectives with the West,” U.S. Air Force general Philip Breedlove, the head of European Command and also NATO’s top officer, said in a February statement. “Instead, it continues to view the United States and NATO as a threat to its own security.”

With the Soviet Union’s collapse in 1991, Washington started drawing down its troops in Europe. The Army stood down its last tank units on the continent in 2013.

The Pentagon dramatically increased the number of war games it participated in with NATO members and non-alliance partners, especially in Eastern Europe. Meanwhile, Russia boosted its support for separatists in eastern Ukraine, sending in armored vehicles and artillery. Tit for tat, with tanks.

In April 2014, U.S. Army troops pulled Abrams tanks and Bradley fighting vehicles out of warehouses in Germany for a fresh round of exercises. After the last tank-equipped units left, the Army had set up the stockpile — called the European Activity Set, or EAS — for training and other purposes.

Four months later, the ground combat branch sent another set of vehicles all the way from Texas to the Baltic states of Estonia, Latvia and Lithuania, as well as to Poland. In April 2015, another contingent from the U.S. state of Georgia brought tanks back to the Baltic region for more mock battles.

In June 2015, U.S. Air Force C-17 cargo planes dropped off a small number of Abrams in Bulgaria. Two months after that, the Marines sent their own M-1sfor training in Bulgaria.

In addition to flying armored vehicles around on cargo jets, the Pentagon makes use of Europe’s extensive network of railroads. For their trip to Georgia, Army troops loaded the EAS vehicles onto trains in Germany and sent them all the way to the Bulgarian port of Varna. From there, a ferry took the tanks — still on flat cars — across the Black Sea.

Since Tbilisi doesn’t use a NATO-standard rail gauge, workers in Varna had to swap out the wheels on the carriages before putting them on the ferry. Otherwise the cars wouldn’t have fit on the rails when they arrived in Georgia.

The ground combat branch ultimately needed four days to get the vehicles into the Bulgarian port, on the boat and to Batumi. The schedule gave American troops another seven days to get the tanks to their final destination and ready to go.

In February, the RAND Corporation highlighted these exact sorts of complexities in a report on a theoretical Russian invasion of Estonia and Latvia. With no help from NATO’s tanks and other heavy armor, the think tank claimed that Moscow’s troops could potentially occupy the capitals of both countries in as few as 36 hours.

“Breaking out the equipment — 24 M-1 main battle tanks, 30 M-2 infantry fighting vehicles, assorted support vehicles — preparing it for movement, transporting it by rail across Poland, offloading it and road-marching it forward into the battle area are unlikely to take less than a week to 10 days,” the analysts theorized.

Tbilisi is acutely aware that American help might not come in time — or at all — when it’s needed most. In August 2008, Georgia fought Russia over the separatist regions of Abkhazia and South Ossetia. And lost.

During the fighting, U.S. officials told American troops, who were in Georgia on a training mission, to stay out of the conflict — even as the Kremlin’s troops looted the Americans’ vehicles and other equipment.

For 2017, the Pentagon has asked for $3.4 billion for the ERI — four times what it requested for the previous fiscal year. A significant portion of the funds would go toward storing more tanks, artillery and other gear in Europe. All told, there would be enough equipment available for a brigade-size unit of up to 5,000 troops.

The Army would send troops on temporary deployments to Europe who could then “fall in” on the equipment. This means the ground combat branch could have a brigade’s worth of soldiers on the ground all the time, but without having to pay to house them on the continent with their families.

“It’s not going to look like it did back in Cold War days,” Secretary of Defense Ashton Carter told reporters on Feb. 9. “But it will constitute in today’s terms a strong deterrent.”

And tanks are a big part of that deterrence.