Get Ready, Russia: American and British Nuclear Submarines Are Training in the Arctic 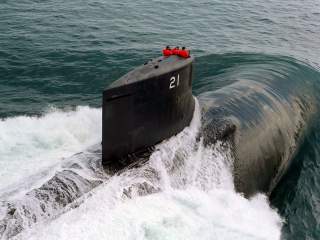 American and British nuclear-powered attack submarines have kicked off the biennial Ice Exercise (ICEX) 2018 wargames in the Arctic Ocean this week.

The five-week biennial exercise is designed assess the U.S. Navy’s operational readiness for warfare in the Arctic. The exercise helps to increase the service’s experience in the frigid region and helps to advance the Navy’s understanding of the Arctic environment, which is becoming increasingly important as tensions with Russia continue to rise.

"With every ICEX we are able to build upon our existing experience and continue to learn the best way to operate in this unique and harsh environment," Rear Adm. James Pitts, commander of the Undersea Warfare Development Center (UWDC), said. "We are constantly testing new tactics, techniques and procedures (TTP) under the ice, and this exercise allows us to do so on a larger scale and alongside our U.K., joint and academic partners."

The activities of the three submarines will be coordinated from Ice Camp Skate, which is a temporary encampment that was established on an ice floe. According to the U.S. Navy, Ice Camp Skate will coordinate activities such as under-ice navigation and torpedo drills between the three vessels. The U.S. Navy’s Arctic Submarine Laboratory (ASL) is the service’s lead organization for conducting the ICEX wargames.

"Our Arctic Submarine Laboratory team has been working for over a year to ensure our Submarine Force is able to conduct dynamic torpedo and under-ice operations in this unique environment," Larry Estrada, director of ASL, said. "This year's camp is prepared to support the force with communication and weapons recovery."

The ICEX comes on the heels of Gen. Curtis M. Scaparrotti’s—commander of United States European Command and NATO Supreme Allied Commander Europe—testimony before the Senate Armed Services Committee on March 8 where he decried the Russian threat in the high north.

“In the Arctic, Russia is revitalizing its northern fleet and building or renovating military bases along their Arctic coast line in anticipation of increased military and commercial activity,” Scaparrotti told the Senate. “Russia also intends to assert sovereignty over the Northern Sea route in violation of the provisions of the United Nations Convention of the Law of the Sea (UNCLOS). Although the chances of military conflict in the Arctic are low in the near-term, Russia is increasing its qualitative advantage in Arctic operations, and its military bases will serve to reinforce Russia’s position with the threat of force. Our highest strategic priority as a Combatant Command is to deter Russia from engaging in further aggression and exercising malign influence over our allies and partners.”