Get Ready, Russia: America's Stealth F-35 Is Heading to the Baltics 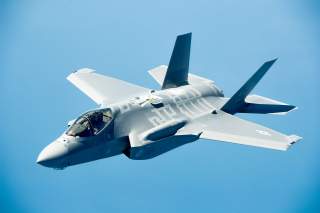 The U.S. Air Force is dispatching the F-35A to Estonia Tuesday to reassure its European allies just days after Russian bombers flew near the coast of Alaska, CNN reports.

The fighter jets will likely not be permanently stationed in the country but are part of the European Reassurance Initiative, put in place by the U.S. after Russia’s 2014 annexation of Crimea. The show of force also follows repeated Russian bombers incursion into Alaska’s air defense zone earlier in April. The bombers flew approximately 100 miles off the coast of Alaska, at first prompting the U.S. air force to scramble fighter aircraft to intercept them.

The Air Force noted after the incident that it was the first time the bombers had probed the U.S. near Alaska since 2015, marking a first for President Donald Trump’s administration. Only two of the fighter aircraft were visible in photos circulated in Estonia.  The U.S. has made approximately 60 intercepts of Russian bombers since 2007. U.S. Air Force officials, however, stressed to Defense News Tuesday that “the deployment has been planned for some time, has no relations to current events, and was conducted in close coordination with Estonian allies.”

The F-35s will reportedly not participate in NATO Baltic air policing operations along the Russian border. Pentagon officials previously told reporters that the majority of F-35 training operations in Europe would occur in the United Kingdom, but added that occasional missions to other countries would occur. These missions will familiarize pilots with flying in the European environment with the new aircraft.

Russian President Vladimir Putin’s spokesman Dmitri Peskov did not take kindly to the F-35’s deployment calling it “”a threat to us.” He continued, “this is an action that threatens our interests, our security.”