Get Ready, Russia: Britain Is Sending Warships to the Black Sea 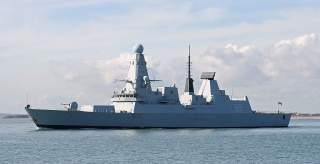 Is Britain girding for a fight in Russia’s backyard? For the first time since the Cold War, Britain is sending a warship to the Black Sea on a military mission.

This time, the goal is to send a message to Russia: don’t invade Ukraine. The question is whether Russia will—or even should—bother to take the warning seriously.

Last time Britain invaded the Crimea was in 1854, when an Anglo-French expeditionary force of several hundred ships and six hundred thousand men captured Sevastopol. This time, it’s just the single Type 45 destroyer HMS Diamond, which will carry sixty Special Boat Service and Royal Marine commandos, according to the Daily Mail.

“HMS Diamond will lead a NATO task force and help protect 650 British troops who are involved in secret exercises in Ukraine—a country invaded by Russian-backed rebels in 2014,” the newspaper reported.

However, the Type 45 has also suffered from engines that break down when the destroyers sail into warm waters such as the Persian Gulf. Fortunately for the Royal Navy, the Black Sea is not in the tropics.

Britain’s Defense Secretary Michael Fallon told the Daily Mail that “the UK is sending a clear message that we are committed to defending democracy across the world and support Ukraine’s sovereignty, independence and territorial integrity.”

Retired Royal Navy admiral Alan West also told the newspaper that Britain has “undertaken many naval exercises in the Black Sea in the past but these were much more benign circumstances and with benign intentions. This is an operation with a very serious purpose. HMS Diamond can really look after herself and President Putin is a man who respects hard military power. NATO has to show it won’t be threatened and that the UK takes the lead.”

However, it seems unlikely that Putin and his government will feel particularly threatened by the British move. Militarily, a single warship with sixty commandos is merely symbolic. If deterrence escalates into war, then a single Type 45 destroyer, even as part of a NATO task force, wouldn’t survive long off Russia’s coast, which bristles with land-based aircraft, coastal defense missiles and the warships of the Black Sea Fleet. Nor would it help Ukraine much against a Russian land invasion.

Even as a symbol, a lone destroyer doesn’t exactly send a strong signal that Britain will go to war with Russia to save Ukraine. But what’s particularly interesting is that the Black Sea deployment is part of what seems to be a more muscular British foreign policy. Royal Air Force jets are attacking ISIS in Iraq and Syria, British troops are training Ukrainian soldiers, a thousand troops will be deployed this summer in Estonia and Poland, and Typhoon fighters are headed to Romania.

Meanwhile, other RAF Typhoons are headed to Japan for joint exercises, while Britain has announced that its Queen Elizabeth–class aircraft carriers will be deployed in the South China Sea once the ships are completed in the 2020s. All of which is quite a feat, considering that the Royal Navy has now shrunk to just nineteen destroyers and frigates, the RAF has also downsized, and the British Army has receded to fewer than eighty thousand regular soldiers.