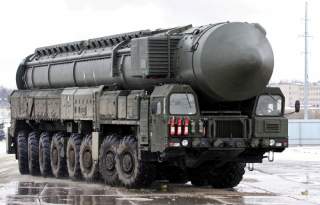 “We will develop and test, by 2017, MOKV command and control strategies in both digital and hardware-in-the-loop venues that will prove we can manage the engagements of many kill vehicles on many targets from a single interceptor. We will also invest in the communication architectures and guidance technology that support this game-changing approach,” Rick Lehner, spokesman for the Missile Defense Agency, told Scout Warrior a few months ago.

The Missile Defense Agency has awarded MOKV development deals to Boeing, Lockheed and Raytheon as part of a risk-reduction phase able to move the technology forward, Lehner said.

Steve Nicholls, Director of Advanced Air & Missile Defense Systems for Raytheon, told Scout Warrior the MOKV is being developed to provide the MDA with “a key capability for its Ballistic Missile Defense System - to discriminate lethal objects from countermeasures and debris. The kill vehicle, launched from the ground-based interceptor extends the ground-based discrimination capability with onboard sensors and processing to ensure the real threat is eliminated.”

While the initial development of MOKV is aimed at configuring the “kill vehicle” for a GBI, there is early thinking about integrating the technology onto a Standard Missile-3, or SM-3, an interceptor missile also able to knock incoming ICBMs out of space.The SM-3 is also an exo-atmopheric "kill vehicle," meaning it can destroy short and intermediate range incoming targets; its "kill vehilce" has no explosives but rather uses kinetic energy to collide with and obliterate its target. The resulting impact is the equivalent to a 10-ton truck traveling at 600 mph, Raytheon statements said.

“Ultimately, these Multi-Object Kill Vehicles will revolutionize our missile defense architecture, substantially reducing the interceptor inventory required to defeat an evolving and more capable threat to the homeland,” Lehner said.