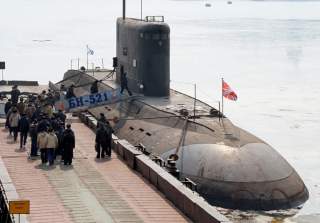 Autonomous robo-ships will hunt for submarines sooner than anticipated. On April 7, the U.S. military christened the Sea Hunter, an experimental vessel which is part of the Pentagon’s Anti-Submarine Warfare Continuous Trial Unmanned Vessel, or ACTUV, program.

At 130 feet in length, the trimaran-shaped Sea Hunter has become the world’s largest unmanned surface vessel and will serve as a test bed for the Navy, assessing the use and capabilities of future unmanned ships.

“I have been waiting for this day for a long time. We are in a period of incredible technological flux,” Deputy Secretary of Defense Bob Work said at the christening ceremony in Portland, Oregon.

The ship packs sonar, electro-optical sensors, and short and long-range radars to navigate and identify ships. Among these is Raytheon’s Modular Scalable Sonar System (MS3). Delivered in November 2015, the system performs active and passive search and tracking, incoming torpedo warning and small-object avoidance.

Combined with Leidos’s own navigation software, Sea Hunter’s computers navigate the vessel, identifying and avoiding other ships and objects autonomously. Having developed a system of algorithms and sensors, DARPA and Leidos successfully met maritime navigation rules, known as COLREGS.

However, the ship will not render sailors obsolete any time soon.

“Although ACTUV will sail unmanned, its story is entirely about people,” DARPA program manager Scott Littlefield said in a press release. “It will still be sailors who are deciding how, when and where to use this new capability and the technology that has made it possible.”

The Office of Naval Research will oversee a two-year testing trial along with DARPA and Leidos at the Navy’s San Diego base. Sea Hunter will continue to test its sparse supervisory control mode, which requires human oversight. Leidos tested this technology for the first time on January 2015 after installing it on a 42-foot test boat.

However, when the mission demands it, the ship can be remotely controlled. Currently, a removable control station sits atop the hull “for safety and backup,” Littlefield told reporters, according to Defense News.

A pilot will remain aboard throughout testing in case of any difficulties.

In his remarks, Work compared the unarmed Sea Hunter’s christening to the introduction of the Predator drone, which entered service in 1995.

But the Predator’s development did not end there. Work recounted the drone’s evolution from an unmanned surveillance aircraft to a killing machine, hinting at a future of armed Sea Hunters … lots of them. One of the ACTUV project’s goals is to develop an unmanned vessel that, due to an unconventional design and lack of crew, could match the speed of diesel-electric submarines.

During the ship’s latest speed test, Sea Hunter reached 27 knots, or 31 miles per hour — which no conventional submarine can beat.

Littlefield explained the ship could collaborate with much larger and manned Littoral Combat Ships, acting as the fleet’s eyes well ahead of it, according to Defense News. With a range of 10,000 nautical miles at 12 knots, the ship’s range covers a wide area.

Another goal of the ACTUV project is to develop a lower cost alternative to manned ships. At an estimated price of $20 million, Sea Hunter would be much cheaper than crewed vessels. The average cost of a Zumwalt-class destroyer is around $2.5 billion.

And, unlike a destroyer or LCS, Sea Hunter — or more precisely, a combat-ready future version — will not endanger sailors’ lives if hit by an enemy torpedo.

“Thanks to advances in technology, we don’t have to worry about anybody getting off this ship,” Work said toward the end of his remarks. He then referred to Capt. Ernest Evans’ comments during the commissioning of the World War II destroyer USS Johnston. “But make no mistake, in the future ships like this one will be fighting ships and we will intend to take them into harm’s way.”

If Sea Hunter performs well in the next two years, the program will pass on to the U.S. Navy.