Get Ready, Russia and China: The Navy's Robot Sub-Hunter Is Sailing Closer to Reality 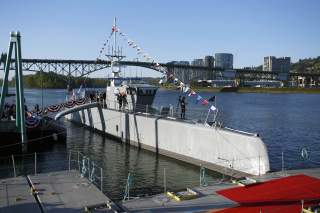 Sea Hunter, DARPA’s prototype automated warship, has been transferred to the Office of Naval Research for further development. From there, it’s possible that the vessel could join the fleet this year.

“ONR will continue developing the revolutionary prototype vehicle—the first of what could ultimately become an entirely new class of ocean-going vessel able to traverse thousands of kilometers over open seas for months at a time, without a single crew member aboard -- as the Medium Displacement Unmanned Surface Vehicle (MDUSV),” read the DARPA announcement.

Sea Hunter began life in 2010 as DARPA’s Anti-Submarine Warfare Continuous Trail Unmanned Vessel (ACTUV) project, which aimed to design a crewless vessel that could autonomously sail to distant waters in search of diesel submarines. The MDUSV carries no weapons but does possess a powerful sonar: once a target is detected—say, a seventeen-knot Russian Kilo-class sub—the twenty-seven-knot Sea Hunter is fast enough to continuously maintain contact until armed ships and planes show up to finish the job.

And all of this on a ship that can sail on a seventy-day mission without a living person aboard. The ship’s AI is designed to be captain and crew, though a human operator can take command of a Sea Hunter from a control station on shore. “That means the fleet commander can push a button, and it will arrive in Bahrain, about 8,300 nautical miles away,” declared former deputy secretary of defense Robert Work when the ship was christened in 2016.

I had a chance to go aboard Sea Hunter during the christening in Portland, Oregon. The first thing you notice is how narrow the ship is, at just eleven feet wide. But no crew quarters, galleys or lavatories means no need for a larger hull to sustain pesky and demanding bipeds.

Will the concept work? Antisubmarine warfare would seem the perfect task for a robot: slow, painstaking and tedious. A long-range automated sub hunter—or better yet, squadrons of automated sub hunters—could stalk elusive prey much more cheaply than manned antisubmarine ships, submarines and planes. And why stop with sub busting? DARPA has also tested Sea Hunter with minesweeping gear and tethered airborne sensors.

There is no technical reason why Sea Hunter couldn’t be armed, either, though DARPA has said nothing about weaponizing an autonomous vessel.

It’s not that unmanned surface vessels, or USVs, don’t already exist. Navies are developing a variety of craft for reconnaissance, minesweeping or even arming them for combat missions, such as Israel’s Protector ships. But these tend to be speedboat-sized vessels, with the Protector coming to only about thirty feet long and weighing about four tons. Sea Hunter dwarfs them. DARPA and now ONR are paying great attention to ensuring that Sea Hunter complies with the International Regulations for Preventing Collisions at Sea, or COLREGS, which specify which vessels have right of way and which must give way.

The elephant in the room—or whale in the ocean—is the issue of autonomy. A Predator drone at least has a pilot at the controls. For Sea Hunter to work, a yacht-sized ship must be able to sail across the ocean without endangering other ships.

Nonetheless, even human-crewed ships frequently collide, as the U.S. Navy discovered recently. Just the fact that a yacht-sized ship might be sailing the ocean under the control of a computer is bound to raise the blood pressure of a few old salts.