Get Ready, Russia and China: The U.S. Navy's Aircraft Carriers Are Getting Stealth Fighters 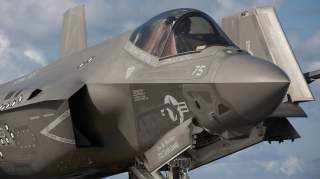 Sensors in the pilot’s Generation “3 HMD” have been improved with new firmware to better enable pilots to target enemies and perform missions at night.

The Navy has been training with and testing high-tech adjustments to the stealthy carrier-launched F-35C’s Helmet Mounted Display to better enable targeting, sensor data viewing and pilot awareness of flight information such as airspeed, heading and altitude, service and industry developers explained.

“They are going to be the initial training squadron for our fleet for pilots flying the F-35C the future. This is the Navy’s first West Coast squadron. They will be flying the F-35C out of Naval Air Station Lemoore for years to come,” said Steve Fielding, deputy public affairs officer for Naval Air Forces.

Sensors in the pilot’s Generation “3 HMD” have been improved with new firmware to better enable pilots to target enemies and perform missions at night, Navy developers explained.

The new display is engineered to add more image fidelity in lower ranges of brightness and low-light conditions; this allows for better targeting and carrier-landing ability in the darkest conditions when there is no moonlight, Navy officials explained.

At the same time, ongoing training pilots on the subsystems to prepare for operational missions also includes ongoing evaluations of the aircraft’s next-generation technology. Pilots will be training with the aircraft’s 3 HMD, among other systems, at Air Station Lemoore.

All the information pilots need– is projected on the helmet’s visor, rather than on a traditional Heads-up Display, a Lockheed statement said.  The helmet also provides pilots night vision through the use of an integrated camera, the statement continued.

The 3 HMD also allows for efficient viewing of sensor feeds from cameras positioned around the aircraft. The F-35’s Distributed Aperture System streams real-time imagery from six infrared cameras mounted around the aircraft to the helmet, allowing pilots to essentially “look through” the airframe.

Both the training and the continued technology development also include efforts to refine a precision-landing technology called Joint Precision Approach & Landing Systems, or JPALs.

The new stealth Joint Strike Fighter is slated to become operational by 2018, when it will join the carrier air wing and fly alongside the F/A-18 Super Hornet, E2D Hawkeye surveillance planes and other aircraft. Over the next five years, the Navy plans to acquire more than 50 of the new fighters, Navy officials told Scout Warrior.

Prior to this event, developmental testing of the aircraft has been focused on advancing what’s called carrier integration and carrier qualification – effort to seamlessly integrate the new aircraft into the carrier platform and carrier air wing, service officials said.

In a document described as the "Naval Aviation Vision," the F-35C is also described as being engineered with reinforced landing gear and durable coatings to allow the F-35C to withstand harsh shipboard conditions while delivering a lethal combination of fighter capabilities to the fleet.

Landing a Stealth Fighter on a Carrier at Sea:

With a broad wingspan, reinforced landing gear, ruggedized structures and durable coatings, the F-35C will stand up to harsh shipboard conditions while avionics equip the pilot with real-time, spherical access to battlespace information and commanders at sea, in the air and on the ground with an instantaneous, high-fidelity single picture view of ongoing operations.

Carrier landing is never easy as pilots must account for the wind-speed, atmospheric conditions and speed of the ship. Pilots follow a yellow light on the flight deck of the ship called the Freshnel Lens to help the trajectory of the approach, called their glide slope, officials said.

The Fresnel Lens includes a vertical row of yellow lights between two horizontal rows of green lights. Using a series of lights and mirrors, a pilot's approach is reflected by the position of the yellow light in relation to the green lights above and below, displaying whether the aircraft is on the right "center line" or "glide slope," Navy pilots have said.

A hook lowers from the back end of the F-35C aircraft, designed to catch the cable and slow down the plane. In order to maintain its stealth configuration, the aircraft’s hook is internal to the airframe, Navy developers said.