Get Ready, Russia: This European Power Has Plans For a Lethal New Tank 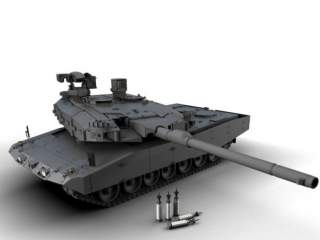 Faced with the resurgent threat of Russian armor, Germany has embarked on a program to develop a next-generation main battle tank that has sometimes been called the Leopard 3. The long overdue move comes after Berlin neglected the Bundeswehr for over two decades following the end of the Cold War and reunification of Germany.

In the short- to medium-term, Germany will have to rely on upgrading the already formidable Leopard 2A7 (+) to counter Russia’s next-generation T-14 Armata main battle tank. Longer term, Germany recognizes that it will have to replace the Leopard 2 with a new design in years 2030 and beyond. As such Berlin has embarked on developing the next-generation Main Ground Combat System (MGCS) in conjunction with France.

According to a November 2015 presentation by Armin Papperger, chief executive officer of Rheinmetall, which builds key components of the Leopard 2 and the American M1A2 Abrams, the journey toward MGCS will be an incremental evolution. The first step will be to upgrade the Leopard 2 with a new digital turret core system, new situational awareness system and an Active Defense System (ADS).

The tank will also need a new high-pressure 120mm cannon and new ammunition. Papperger expects that the new gun and ammunition will yield twenty percent better performance than the current L55 120mm cannon. However, it’s not clear how much further the weapon can be extended. There are significant drawbacks to a longer cannon—which is one of the reasons the U.S. Army retains the shorter L44 120mm cannon for its Abrams. It’s possible that Rheinmetall is using new materials to increase the pressure within the cannon without increasing the cannon’s length.

In the medium term, Germany will have to refit the Leopard 2 with a new 130mm cannon, Papperger said. The 130mm gun is a new concept—earlier NATO studies had looked at refitting the Leopard 2 and Abrams with a much larger 140mm cannon to counter late-Cold War Soviet developments. Nonetheless, the 130mm gun would offer fifty percent better armor penetration performance than a 120mm cannon. Rheinmetall will kick-off the work on the new gun—which is one of the preconditions for developing the MGCS—later this year.

The Armata’s Afghanit APS is believed to incorporate at least one type of hard-kill countermeasure designed to intercept incoming projectiles—according to the International Institute for Strategic Studies’s (IISS) Military Balance 2016. The IISS assessment is also backed up by Russian sources, which suggests that the Armata launches interceptor rounds fitted with explosively formed penetrators—which might be effective even against incoming kinetic energy projectiles. However, APS systems are always most effective when used against chemical energy rounds like rocket-propelled grenades or missiles.

“Most revolutionary is the Armata-based T-14 Main Battle Tank featuring an uncrewed turret. There is emphasis on protection across the platforms—including active protection systems (APS)—reflecting lessons learnt as well as perceptions of future operating environments,” states the Military Balance 2016. The report adds:

“When it enters service Armata will be the first tank designed for an unmanned turret and APS. Successful fielding of APS will reduce the effectiveness of anti-tank guided missiles and shoulder-fired weapons such as rocket propelled grenades. This will change battlefield dynamics by increasing the importance of cannon, anti-tank guns and tanks.”

While Germany has traditionally been a leader in armored warfare, Berlin has neglected the Bundeswehr in recent years. Only time will tell if Germany is successful in its plans.