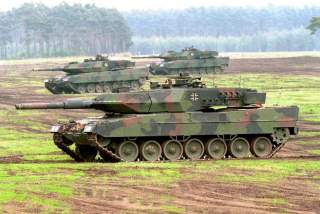 Germany has begun the process of upgrading 103 out-of-service Leopard 2A4 and 2A6 tanks to the latest model, the Leopard 2A7V—an upgrade that will cost the state the equivalent of 760 million euros ($833 million). The big news is that by revamping and deploying these new vehicles, the Bundeswehr is expanding its tank fleet by over 40 percent, from 225 to 320 main battle tanks.

This increase in force size is going to take time: the revamped Leopards will enter service between 2019 and 2023. There are also provisions to convert thirty-two additional tanks into specialized engineering and bridge-laying support vehicles.

Before getting our elbows greasy diving into the technical details, we should consider the expansion’s obvious significance: the additional tanks are part of Germany’s gradual rearming of the Bundeswehr after years of downsizing and declining operational readiness, due to the end of the Cold War and trust in the U.S. military to shield it from future threats. The German public, mindful of the legacy of World War II, has shown little enthusiasm for getting involved in foreign wars or maintaining a large military.

However, defense policy changed in 2014, when Moscow demonstrated its willingness to use military force to advance its foreign policy objectives in eastern Europe by seizing Crimea from Ukraine in April 2014 with “little green men,” followed by the deployment of Russian tanks (crewed by active-duty Russian Army “volunteers”) in support of Russian separatists in eastern Ukraine. German security concerns have recently been further aggravated by a new element of unpredictability in the U.S. commitment to NATO. While the Trump administration recently declared that NATO is “no longer obsolete” after entering a dispute with Moscow over Syrian chemical weapons, Berlin probably still feels it may need to play a larger role as a security provider in central Europe.

The Leopard 2 has for several decades stood among the top main battle tanks in the world, alongside the American M1 Abrams. Both vehicles share potent Rheinmetall 120-millimeter guns, boast advanced sights and fire-control systems permitting accurate fire on the move, and tip the scales at well over sixty tons in weight due to their heavy composite armor, which renders their frontal armor virtually immune to most Cold War–era antitank rockets and missiles. The Abrams and Leopard 2 are also relatively nimble for heavy main battle tanks, able to cruise over forty miles per hour.

Comparing the M1 and Leopard 2 leads to a sort of Coke-Pepsi rivalry—which is to say that they both do roughly the same thing, but there are enough little differences to inspire die-hard advocates for each. The Leopard 2’s diesel engine is often favorably compared to the loud, gas- turbine engines used in the M1, affording the German tank greater operational range. The M1A2 tanks used by the U.S. Army benefit from ultra-dense depleted-uranium armor and ammunition that enables superior defensive performance and higher penetrating power, respectively. However, Germany has political issues with using depleted uranium, so the later Leopard models compensate with highly sloped wedge-shaped turrets with spaced composite armor, as well as longer-barrel guns (fifty-five-calibers instead of forty-four) to generate greater kinetic energy for their tungsten armor-piercing shells, in order to (mostly) catch up to the punch of American DU rounds.

Nearly 3,500 Leopard 2s have been produced in numerous variants over the years, each version boasting improvements in armor protection and firepower since the first in the series entered service in 1979. Leopard 2s currently serve in the armies of eighteen countries, including Canada, Indonesia, Poland, Qatar, Spain, Sweden and Turkey.

Although the Abrams has seen a lot more combat over the decades, the Leopard 2 has been battle tested—though not against the Soviet tanks it was designed to duel with. In Afghanistan, Canadian and Danish Leopard 2s serving in NATO’s International Security Assistance Force survived hits from IEDs and rocket-propelled grenades, though a few were damaged and one Danish crew member was mortally wounded by a mine explosion. In return, the Leopard 2s were praised by coalition commanders for providing effective fire support for international forces battling the Taliban.

The Leopard 2 did not fare so well when Turkey deployed a battalion of them in December 2016 as part of its campaign to capture ISIS-held Al Bab near the Syrian border. Deadly antitank weapons have proliferated in the Syrian conflict, and much less well-armored Turkish M60 Patton tanks had suffered heavy losses to both ISIS and Kurdish rebels. In a series of attacks, ISIS destroyed or disabled as many as ten Leopard 2s using old Russian antitank missiles. Some of the Leopard 2s were even “captured” before being knocked out by coalition air strikes.

Analysis of several of the attacks shows that the Leopard 2s were being hit in the rear or side armor—and the reality is that the passive armor on all main battle tanks today is thin and vulnerable on the side, rear and top. Saudi M1 tanks in Yemen have recently suffered heavy losses from antitank missiles striking their side armor. The exposure of these tanks on open ground to long-range missile ambushes does reflect tactical errors, and a lack of training and good defensive perimeters. However, in combat environments with dense terrain, and especially in urban areas, ambushes to the side or rear armor can be very difficult to avoid.

During the occupation of Iraq, the U.S. Army deployed the Tank Urban Survival Kit (TUSK) variant of the M1 to battle in Iraqi cities. These had added explosive-reactive and slat armor on the side and rear specifically designed to defeat the shaped-charged warheads of portable antitank missiles. The German Army is now taking its own stab at the TUSK concept through the 2A7V.

The Bundeswehr currently operates 152 Leopard 2A6s, forty-eight 2A6Ms (a model with enhanced protection against mines and IEDs), and twenty 2A7s. The 2A6 introduced the new lengthened cannon, while the 2A7 features a number of incremental improvements including an auxiliary power unit (permitting the tank’s electrical systems to function while the motor is off), air conditioning, improved Attica thermal imagers and a new battle management system to aid the crew in keeping track of developments on the battlefield. The new batch of 2A7Vs will actually be built mostly out of old 2A4 and 2A6 tanks sold back to Germany by Sweden and the Netherlands, as well as an upgrade of the existing 2A7s.

The 2A7V or (2A7+) is an “Urban Operations” evolution of the 2A7, derived from an earlier Peace Support Operations prototype. (The “V” stands for “improved” in German, and inadvertently mimics the designation of the first German-designed tank to ever see combat, the World War I–era A7V.) The new tank has reinforced belly armor for protection against IEDs and mines, and can fit dual-layer modular composite armor plates tailored to counter different kinds of threats. These plates can reportedly be fitted all around the tank.

Like the TUSK Abrams, the 2A7V will have a remote weapon station allowing the crew to fire the turret-mounted machine gun remotely without exposing themselves to enemy fire. This FLW-200 system can mount either a 7.62- or 12.7-millimeter machine gun, or even a forty-millimeter automatic grenade launcher.

The 2A7’s main gun can now program its high-explosive shells to airburst above enemy troops hiding behind cover, or delay them to explode after penetrating the side of a building. The new A7V vehicles may also receive new L55A1 guns with 20 percent higher firing pressure than the base model, giving the shells greater range and penetration against enemy armor.

Finally the 2A7V features additional infrared cameras and upgraded sights for better situational awareness, support for attaching dozer blades and mine-clearing plows, and new external telephones to allow friendly infantry to communicate with the tank crew. All of these upgrades enhance the tank’s ability to fight opponents in dense urban terrain.

While these are useful upgrades—many of them similar to those on the latest Abrams variant—they are not revolutionary ones. There does not appear to be any soft- or hard-kill active protection systems (APS), such as those on the Israeli Merkava tank or the new Russian T-14 Armata. Soft-kill APSes typically use multispectral smoke grenades to confuse the guidance systems in incoming missiles, while a hard-kill system automatically attempts to shoot projectiles down before they hit. These systems have reportedly proven effective in Israeli service.

Western militaries have experimented with hard-kill APS defenses and made limited use of reactive armor (ERA)—bolt-on explosive bricks that explode outward to prematurely trigger incoming shaped-charge warheads. However, they have been reluctant to install them on operational tanks, because ERA and APS can be depleted and create blasts that could potentially harm nearby friendly troops. Even though German manufacturers have developed no fewer than three different hard-kill APS systems, none appear to be installed so far in the new 2A7V tanks. Of course, the new passive modular armor will enable enhanced levels of protection around the Leopard 2—but by exactly how much is unclear, though one tank expert estimates the improvement to be considerable.