Get Ready, Russia: The U.S. Marines Might Be Going to Norway to Stay 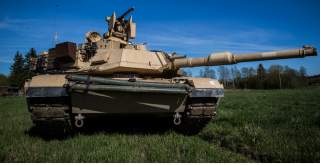 Dozens of U.S. Marines may soon be getting a new home in Norway. If the two countries finalize the deal, the deployments would follow years of strong military ties between Washington and Oslo.

As of October 2016, the Norwegian parliament was considering hosting a rotating force of approximately 300 U.S. Marines in the Scandinavian country. As part of a larger plan to boost military expenditures over the next 20 years, the Norwegian government is already expected to increase military spending in 2017 by $230 million.

The proposal comes at a time when tensions between Russia and Western Europe are running especially high. NATO members in particular have criticized the Kremlin’s aggression in Ukraine and controversial role in Syria.

“We have an increasingly unpredictable neighbor to the east which is strengthening its military capacity, and showing willingness to use military force as a political tool,” Norwegian Prime Minister Erna Solberg said in June 2016.

But since World War II, the United States has seen Norway as an important ally in general. Long before then, Norwegian and American politics were intertwined, though not always directly.

During the 19th century, the Norwegian independence movement drew some inspiration from the United States’ split from Great Britain. When drafting their own founding documents, Norwegian politicians took ideas from the American constitution and from French revolutionary thought.

After finally achieving full independence from Sweden in 1905, the small country tried to keep to itself. Norway managed to sit out World War I.

Unfortunately, during World War II, Nazi Germany invaded, seeking control of vital ports and natural resources. Despite Norwegian and British troops doing their best to mount a defense, it soon became clear they were no match for the Blitzkrieg. The Norwegian Air Force and Navy relocated everything they could to Britain. The German invaders decimated the Norwegian army.

Many who escaped trained with British intelligence services. After the United State entered the war, American spies worked with their Norwegian counterparts in exile.

In 1942, the U.S. Army formed the 99th Infantry Battalion entirely from bilingual Norwegians and Norwegian Americans. While the bulk of the unit went to fight in France and Belgium, several members would serve with the Office of Strategic Services, a predecessor to the Central Intelligence Agency.

After World War II ended, Norway received American aid under the Marshall plan and became a founding member of NATO. The Norwegian military would go on to join its allies in the Korean War, as well as deploy on numerous peacekeeping missions.

Throughout the Cold War, Norway was a popular destination for NATO troops to practice winter warfare tactics. The frigid climate was ideal for putting troops to the limit.

The proximity to the Soviet Union sent a strong message across the Iron Curtain. It wasn’t uncommon for Norwegian and Soviet forces to have tense interactions in the Baltic Sea and along the Norwegian-Russian border.

In March 2016, U.S. Marines descended on the frigid country for a major training exercise. Among other practice sessions, the leathernecks joined their Norwegian counterparts for an intense ice track driving lesson, seen in the video below.

At the same time, Norwegian forces have been active abroad, often fighting alongside U.S. troops. Oslo joined NATO interventions in the Balkans in the 1990s, contributed special operations troops in Afghanistan after the American intervention in 2001, participated in the U.S.-led invasion of Iraq in 2003 and the NATO operation over Libya in 2011.

When Islamic State surged into Iraq in 2014, Norwegian authorities quickly sent humanitarian aid to the beleaguered country. In May 2016, Oslo announced plans to send elite troops to help in the battle against the terrorist group.

And while a permanent U.S. Marine contingent in Norway would certainly be new, the leathernecks have had a presence in the Scandinavian country for decades. In 1981, Washington and Oslo cut a deal to begin stockpiling weapons and equipment in the event of a surprise Soviet invasion of the region.

After Russia seized control of Ukraine’s Crimea Region in March 2014, the Pentagon started adding extra equipment — including Abrams tanks — to these bunkers. For both Washington and Oslo, an increasingly assertive Russia has brought back memories of old Cold War threats.

As America and its NATO allies position themselves to counter the Kremlin’s moves, it’s likely that relations between Washington and Oslo will continue to play an important role. Sending U.S. Marines to the land of the midnight sun may be just the beginning of a new era for the two countries.