Get Ready, Russia: Ukraine Wants to Build Its Very Own MiG-29 (Sort of) 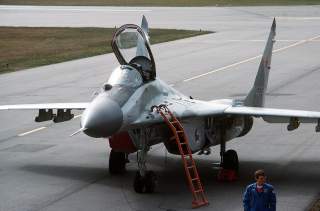 Ukraine is developing a new indigenous lightweight fighter aircraft fighter according to a new report. However, the project has existed in some form for more than ten years.

According to a report in Jane’s, Ukrainian President Petro Poroshenko announced that Kiev would develop its own twin-engine, multirole fighter during a visit to the Ivchenko-Progress engine design bureau. The aircraft—which currently exists as sketch drawing—is called the Legkiy Boiviy Litak or Lightweight Combat Aircraft. It apparently bears more than a passing resemblance to the MiG-29.

Though the prospective Ukrainian fighter might look like a MiG-29, it would use indigenous engines and avionics. The jet would be powered by a pair of AI-322F derivative engines, but the fighter’s avionics would be of both Western and Ukrainian origin. "We will soon be able to create our own aircraft engine for the fighter," Poroshenko said—according to Jane’s.

Reports of an indigenous Ukrainian fighter date back to before 2005, indeed former Antonov designer general Dmitry Kiva made the claim in 2014 that Ukraine can independently develop gunships and fighter aircraft. However, in reality, it is highly dubious if Kiev has the industrial base or money to develop its own jet independently. Particularly, it is highly unlikely—given the nature of the former Soviet industrial base—that Ukraine would have the wherewithal to independently develop avionics for the new jet, particularly the radar.

“’Sketch outline’ being roughly equivalent to the ‘playful freehand drawings’ my son enjoys,” Richard Aboulafia, vice president of the Teal Group aerospace consultancy told The National Interest. “Or, to put it another way, I'd take this about as seriously as I'd take that UAE-MiG concept plane.”

If the Ukrainian aircraft does eventually materialize, it is likely that it would use a substantial amount of foreign content. That could mean that subsystems such as the radar could be sourced from the United States, Israel or Europe. For example, Israeli-built Elta 2052 active electronically scanned array radar would easily fit into a MiG-29-sized airframe. However, foreign components would increase the cost of the jet. Moreover, it is unclear if Western powers would be willing to export cutting edge systems to Ukraine because of potential technology leakage to Moscow.

In any case, the Ukrainian aircraft might ultimately turn out to be a more modest development than what is currently being reported. While the Ukrainian development presently appears to be an effort to develop a full-sized fighter aircraft, Ukraine’s original intent seems to have been a much more modest aircraft. Early reports seem to indicate that Kiev intended to develop an aircraft—then called the D-14—that could be modified for a number of roles similar in concept to the Korean T-50. Indeed, a diagram depicts the D-14 concept configured for a range of roles including a fighter, an advanced trainer and strike aircraft.

Only time will tell how Ukraine’s new fighter will look—if it is ever built.