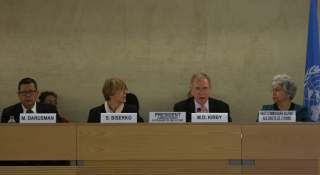 Despite North Korean threats, the United Nations created on June 23 an office in Seoul to combat Pyongyang’s egregious human rights violations. Although basic human rights are the quintessential element in the quality of life, the international community has paid insufficient attention to the horrendous deficiencies of human rights in North Korea.

While well-meaning public campaigns were directed at human rights violations elsewhere in the world, the North Korean regime’s attacks on its own citizens were largely ignored. This was due in part to the paucity of information from within the Hermit Kingdom.

But another factor was that, for some in South Korea, there was concern that raising the sensitive issue of human rights in North Korea would negatively impact the inter-Korean relationship. This explains why—despite 10 years of legislative debate—the South Korean parliament has failed to pass a North Korean human rights act.

A turning point to this global indifference may have been reached when the UN created a Commission of Inquiry on North Korean Human Rights in early 2013. Following a year-long wide-ranging investigation, including extensive interviews with North Korean defectors, the commission published its report in February 2014.

The nearly 400 page commission report concluded that the violations of human rights by the regime were so atrocious, widespread, and systematic as to constitute “crimes against humanity.” The commission recommended a number of actions to be taken to address such inhuman abuses.

The report generated extensive global discussions and led the UN Human Rights Commission to adopt a resolution to deal with the issue. The South Korean government responded to one of the recommendations by agreeing to host a UN Human Rights Office in Seoul.

It is easy to understand why South Koreans are concerned with human rights just across the DMZ in the North and why the South Korean government is now trying to solve the problem by cooperating closely with the international society. This is a fundamental issue for all Korean people. Seoul no longer wants to ignore the inhumane suffering of the North Korean people brought on by the brutal practices of their regime.

Seoul will continue to pursue its engagement with Pyongyang to reduce tensions as well as induce reform and systematic changes in North Korea. But, South Korean cooperation with the international community is critical to improving human rights in North Korea. A combination of bilateral and multilateral efforts are necessary to achieve these objectives.

Some argue that the opening of the UN Human Rights Office in Seoul triggered fierce opposition by Pyongyang and could strain the inter-Korean relationship. While likely in the near-term, we believe that changing North Korean society and achieving peace on the Korean peninsula must be pursued via a long-term strategy and broader considerations.

South Korea is now ready to take the necessary steps to improve quality of life in North Korea and to achieve peace on our peninsula, despite the momentary hardships. Even if such a policy hinders progress in resolving the North Korean nuclear issue, South Korea and the international community are now committed to practical solutions to resolve the deplorable human rights conditions in North Korea.

We hope that the commencement of the Human Rights Office becomes the catalyst that results in actually helping the North Korean people, creating the opportunity to build trust in inter-Korean relations, and ultimately accomplishing Korean unification and true peace on the Korean Peninsula.

Dr. Park Ihn-hwi is Professor of International Studies at Ewha Women’s University in Seoul, South Korea. Dr. Park is a member of the Advisory Committee of the Ministry of Unification.