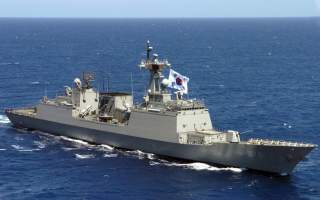 Four years ago I wrote about South Korea’s strategically far-sighted but locally controversial plans to construct a new naval base on Jeju island. After speaking at last week’s Jeju Forum I couldn’t resist an invitation from the Korean Institute for Maritime Strategy to slip away between panel discussions to attend a briefing at the newly opened facility.

The major locational advantage of the base for South Korea, given its hemmed-in geography, is that it faces onto the relatively open waters of the East China Sea. The ROK Navy (ROKN) has existing facilities at Busan and Jinhae, and previously operated a small facility on Jeju’s northern coast. But the much larger, south-facing base offers unobstructed access to South Korea’s major sea lines of communication passing through the western Pacific.

Seoul’s commitment to invest in a major new base on South Korea’s southernmost extent of territory suggests a broader significance: a recognition that the country needs to broaden its strategic horizons beyond the ever-present threat from the North. This is something that deserves encouragement, given South Korea’s unrealized potential as a middle power with global maritime interests, and a stake in freedom of navigation very similar to Japan.

The ROKN has long nurtured ambitions to develop into an ocean-going 'blue-water' force. It has taken considerable strides towards this goal, acquiring an impressive, domestically-built force structure, while playing second or third fiddle within a defense force configured to deter an adversary who is still primarily land-based (but moving increasingly into hybrid and asymmetrical dimensions of warfare).

In 2010, the loss of a South Korean corvette with 46 sailors in coastal waters to a suspected North Korean torpedo attack was a brutal reality check for the ROKN’s strategic ambitions. Against such real-world threats, covering coastal contingencies and blue-water operations in parallel is a stretch for a middle-sized navy like South Korea’s.

As if these challenges were not enough, Seoul’s plans to develop a strategic base capable of serving as a blue-water springboard encountered resistance from some of Jeju’s inhabitants, channeling a strong anti-military strain in the island’s identity. Protests during the long construction phase drove up costs, forcing the ROKN to compromise on their original plans. The need to demonstrate economic value to the island has additionally meant re-designating the naval base as a joint civil-military facility. The current plan is to allow cruise ships to dock in the purpose-built naval harbour, which is large enough to dock a flotilla of up to 30 warships. How such an awkward arrangement would work in practice is unclear, and it may be that the dual-use plan for passenger ships is quietly dropped.

Despite ongoing small-scale protests against the base, Jeju’s new naval facility was finally opened in December 2015. However, Maritime Task Flotilla 7 (MTF-7) was set up significantly earlier, in 2011, as a new command tailored for the new base. Forces assigned to MTF-7, which has its headquarters on Jeju, include three Aegis air warfare destroyers and six KDX-II helicopter destroyers. One or two Jangbogo-class submarines are also deployed forward there. The fact that there are no aviation assets assigned to MTF-7 is arguably one weakness. But aircraft and other naval units based on the Peninsula would potentially be available to augment the flotilla if needed.

Underlining the ROKN’s attachment to the blue water concept, MTF-7 differs from other South Korean military commands in that it has no limitation to its area of operations, which theoretically extend as far as South Korea identifies its maritime interests. MTF-7 has participated in non-combatant evacuation operations from Yemen and Libya, and contributed forces to multinational counter-piracy patrols in the Indian Ocean. Closer to home, it has played a role in tracking, detecting and recovering debris from North Korean long-range missile tests, underlining the primary importance of defence across the DMZ – even from the relative distance of Jeju.

Closer to the island, South Korea claims extensive maritime jurisdiction extending into the East China Sea, where its claims overlap with those of China and Japan. Korea has historically sought to chart an independent course as the shrimp figuratively caught between these two whales. The decision to establish a new base and command at Jeju is a nod towards this basic strategic continuity, notwithstanding the unresolved problem of national unification.

Although Korea-Japan relations have been politically cold for several years, they have never deteriorated into security tensions, in spite of their territorial and maritime disputes. By contrast, President Park Geun-hye has pursued a closer relationship with China, which Xi Jinping has reciprocated by prioritizing diplomatic relations with Seoul over Pyongyang. Notwithstanding this high-level entente, at ‘sea level’ South Korea has experienced direct maritime pressure from Beijing. Infringements by Chinese fishing vessels within South Korea’s EEZ have been a constant and occasionally deadly source of friction. Beijing’s East China Sea ADIZ pointedly clipped the edge of South Korea’s own longstanding ADIZ. Boundary negotiations between Seoul and Beijing have struggled to progress towards an agreed delimitation. While there is warmth in other areas of the bilateral relationship, South Korea maintains a strategic wariness regarding Beijing’s activities in the maritime domain.

One of MTF-7’s responsibilities is to undertake regular patrols to South Korea’s manned artificial facility attached to the Socotra seamount, approximately 150 kilometres south of Jeju. This area has been the scene of counter-patrols and counterclaims by China. As a submerged feature, Socotra is not legally entitled to generate maritime jurisdiction. But it is still regarded as territory by some South Koreans. Enhancing the country’s naval presence around Jeju is therefore closely linked to asserting and protecting Seoul’s maritime interests in the delicately poised relationship with China.

The US, as South Korea’s and Japan’s common ally, is inextricably linked to these geopolitical calculations. Access to the strategically located base at Jeju ought to be of potential interest to the US Navy. But Seoul is likely to tread cautiously here. It is early days, but no foreign warship has yet entered the harbor in the base’s first six months of operation. It will be interesting to chart how Jeju and its naval flotilla feature in South Korea’s future naval diplomacy.