Good News, Russia and China: The Great Shrinking of the US Military Is Here 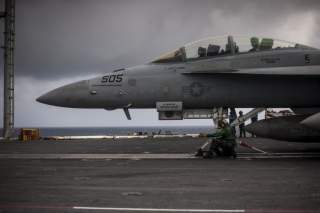 Every year at this time, we see the same kind of headlines: “U.S. biggest military spender in the world.” They’re are all based on the release of the global military spending database, an annual report compiled by the Stockholm International Peace Research Institute (SIPRI).

What the headlines usually miss is that U.S. defense spending is going down while global military spending is going up. The fact that the U.S. spends more on defense than any other individual nation dramatically misses the point.

First, we live in a world of growing threats against U.S. vital interests. China, Russia, Iran, and North Korea are driving the details of the Pentagon’s latest defense budget proposal. In the 2016 Index of U.S. Military Strength, China, Russia, and Iran were assessed as being particularly aggressive against the interests of the United States, while North Korea was rated as downright hostile. Each of these countries is actively attempting to coerce and bully its neighboring nations, and they all pose high to severe threats to the United States and our interests.

Second, the U.S. military budget has been cut by 25 percent in the last five years. This has resulted in dramatic declines in the U.S. military’s ability to fight and win. Fifteen years of conflict and years of tight budgets have taken a grave toll, worsened by these budget cuts. Top military leaders have told Congress that their readiness is, as the vice chief of staff of the Air Force recently put it, “at a near all-time low due to continuous combat operations, reduced manpower, an aging fleet, and inconsistent funding.”

Third, a big part of why the U.S. maintains a large military is because we have learned that major conflict in Europe, the Middle East, and Asia can be devastating to our economy.

A strong U.S. military can help deter conflict in these regions and, if deterrence fails, win a conflict quickly, thus mitigating a war’s effect on the U.S. The new budget data shows that military spending is increasing dramatically in Eastern Europe and Asia. Russia and China are driving these increases, but their neighbors are taking note and increasing their budgets as well. (See these great maps from Bloomberg.)

Putting these changes in regional context is even more striking. In the past 10 years, Russian forces have moved across their border to invade neighboring countries, most recently annexing Crimea from Ukraine and actively assisting a separatist force in destabilizing the eastern half of Ukraine.

China continues to assert its claims by force in the South China Sea, creating islands in long disputed international waters, then militarizing them, and intimidating other countries from freely using the seas and airspace around them. Iran is more active than ever, testing ballistic missiles, helping to fuel the turmoil being felt throughout the Middle East, and even seizing U.S. sailors. To make matters worse, North Korea continues to test nuclear weapons and missiles, in addition to issuing threats of a pre-emptive nuclear attack.

The fact that the U.S. spends more than a few other countries combined on defense is not particularly useful, but it is just one of many bad arguments for cutting defense spending. Instead of being distracted by the headlines, Congress should work on rebuilding the U.S. military so that it can do what the nation needs it to do: protect the U.S. and its interests around the world in many places at the same time. After fifteen years of conflict, our military needs robust funding to restore readiness and recapitalize for the future. A strong, modern military is vital for a strong America.