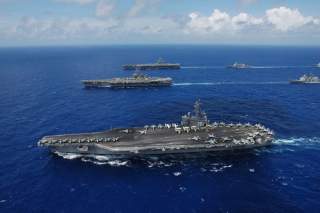 Speaking at a forum on national security in South Carolina on Monday, Governor Kasich argued that the United States should try to have around 15 aircraft carriers.

“We have about 10 carriers now, my goal would be to get closer to 15. And you’ve got to have the ability to project power when you get there,” Kasich said, the Columbus Dispatch and Politico reported.

Speaking to reporters after the forum, Kasich clarified his remarks by saying that the project to build five additional aircraft carriers would have to be done “over time. It’s not going to be done in a day. It has to all be done calmly and over time.”

The crux of the issue for Kasich, as is so often the case when it comes to the defense spending and the Navy in particular, is cost. The latest U.S. aircraft carrier, the USS Gerald R. Ford, cost between $6 billion and $10 billion to build, according to the Columbus Dispatch (other estimates put the cost of the lead ship at upwards of $12 billion). Adding an additional five aircraft carriers to the ones America already intends to build would be an enormous burden on federal spending.

This is problematic for a candidate like Kasich, who is running in no small part on his ability to balance the federal budget. Repeatedly on the campaign trail Kasich has touted his experience as the chairman of the House Budget Committee, noting that he held this position the last time the U.S. government managed to successfully balance the budget. In an op-ed on CNN on Monday, Kasich sent so far as to declare “I support a constitutional amendment requiring a balanced federal budget.”

Still, Kasich’s fiscal prudence does not appear to extend to the U.S. Navy, which the Ohio governor is a strong proponent of expanding. At the South Carolina forum on Monday, Kasich said that the U.S. Navy should be expanded to “at the minimum we ought to try and build up to 300 [ships],” up from just 272 ships today. In the aforementioned CNN op-ed, Kasich linked to a 2014 report calling for the U.S. Navy to be expanded to 346 ships.

In the same op-ed Kasich made a valiant defense of expanding the U.S. Navy, calling it his second priority after balancing the federal budget.

“Our second priority must be renewing our Navy. Other services have legitimate needs too, but reinvigorating the Navy's ability to project power globally is critical to defending and advancing American interests, including ensuring the free flow of global commerce,” the governor wrote.

In a veiled threat to China and Iran, he added: “Those who mistakenly think they can deny access to a corner of the world—particularly in the Western Pacific and Persian Gulf—need another visit from a carrier battle group to remind them that the global commons are, in fact, just that: the world's shared real estate.”

As Politico points out, Kasich has not always been so hawkish on weapons procurement. During his days in Congress, for instance, he opposed purchasing additional B-2 stealth bombers and said there were major savings to be had by overhauling the Defense Department. And, although he supported invading Iraq in 2002, he clarified this week that he now believes that was a mistake. He has suggested in recent months that the United States might need to put boots on the ground to defeat the Islamic State of Iraq and Syria.

The United States currently plans to build 10 Ford-class carriers through 2058 at a pace of one per five-year interval.